My 17 year old nephews were visiting this week.  They used to love to go Penny Finding when they were little.  For this visit I gave the boys a list of a dozen things to do and asked them to rank the items from 1-5 as far as their interest level.  Penny Finding now ranks only a 1.  OK.  Understood. We will NOT go Penny Finding. 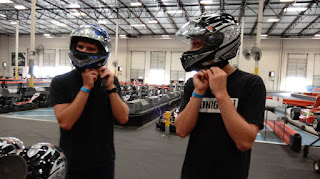 When asked what they WOULD like to do to celebrate their joint birthdays, they wanted to try indoor go kart racing.  That option was Ranked #5 by both boys.
We went to K1Racing.  The boys signed up, completed the information session, and put on their gear. 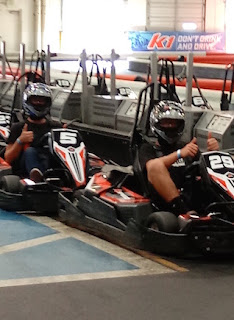 The boys and other racers were assigned their cars.  At the very last minute they were asked to hop out and get into other cars.  Brandon was placed into the lead car, Nicholas in the second car, and the other racers behind them.

The boys were getting strapped in when all of a sudden Brandon jumped out of his car and came over to Uncle Doc and I on the sidelines.  I couldn’t imagine why?  Brandon held out his hand.  He showed us a Hit for the Cycle (penny, nickel, dime and quarter) plus one additional quarter. (25 is my favorite number)!

It was almost as if the Penny Angels were saying: “OK.  You think you are too old to go Penny Finding any longer?  So we will put the coins where you can not ignore us. We are at your side and will continue being with you”.  LOL

Thoughts:
Who is the driver in YOUR race car and where are you headed?