For several years our wedding anniversary seemed to fall during solar car rayce times. This year we spent much of the day with solar car team related activities.

This morning after a few chores we headed to campus to work on the upcoming solar car team reunion. On the way to school Doc stopped at Starbucks for a coffee and a nickel. (Coin #1). I spent a few hours digging out old trophies, press clippings, posters, awards, and more. Doc read his emails.

Next we headed to Pasadena to see our son Brian. He broke his arm last week and Thursday had a titanium plate put in. On the way, Doc stopped for Starbucks coffee. I wandered next door to a little shopping complex. It was interesting; a building with all sorts of little shops around the perimeter and groceries in the center court. I was very surprised there were no coins to be found. Just as I was leaving I spotted a penny semi-behind the counter. I offered to trade a Penny Card for permission to take the floor penny. The cashier agreed. I did a one-knee retrieval and found two pennies while down there. (Coins #2&3).

I met Doc back at Starbucks. He found a penny as we were walking back to the van. (Coin #4) 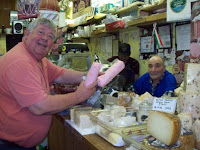 We spent and hour with our son and his fiancée. She is taking such great care of him. We left around 3 pm and Doc was hungry so we stopped at a little Italian restaurant. It was closed so we wandered into the Italian grocery store next door and inquired if they had any sandwiches for sale? We were pointed to the back corner of the store where a little old man was sitting. He promised to make us the best sandwich ever. He said customers drive 50 miles for his special creations. A great anniversary treat.

This evening I did not want to spend time doing a lot of grocery shopping (I dread the chore and it is our Anniversary). I was anxious to pay bills, do laundry, write some emails and follow up with some other action items. So we only went to one store. We collected two dimes and four pennies. (Coins #5-10)

KR cleaned out the coin-counting machine at Vons: