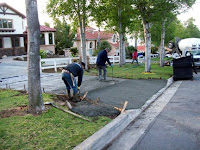 I planned to be at the Penny Palace by 7 a.m. today to see the final concrete pour. However, there was a beautiful little blue bird in the roadway and I was worried it might get hit, so I parked and helped it get out of the road.

The concrete guys completed the driveway approaches - including the texturing for the horse trail. They also poured a small concrete pad for the mailbox post I have designed.

The landscaping team continued to dig new trenches in the back yard. I have given up trying to figure out what they are doing. In the front yard they moved many loads of topsoil and laid sprinkler lines. 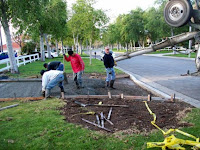 At 10:30 I made a quick trip over to Rental #2. I met with the Housing Authority Inspector who signed off on each of the items he had previously listed for attention. We are OKd to have the tenant move in. I will meet with her tomorrow.

A brief stop was made at the Post Office to mail some items and collect a penny. (Coin #1)

Doc was eager to ensure the water drained properly along the South side of the house. Thus, he spent a few hours moving rock and hauling topsoil.

At 1:30 the postal carrier arrived and presented our first delivery - even though we do not yet have an official mailbox. One bill and one letter from the County Tax Assessor.

At 2:30 Doc was very tired and asked me to help him work in the South yard. I had planned to leave at 2 to run errands, plus I did not want to push a wheelbarrow. Concrete Miguel was packing up for the day. Perfect timing! I offered to pay him if HE would haul dirt with Doc. He did and he probably hauled 4-5 times more dirt than I could have in that time.

Doc locked up the Penny Palace around 6 p.m. He stopped at 7-11 for a coffee and HIS Penny for the day.