Today we had a special day planned. We were taking the niece and nephews to the Science Center for dinosaur hunting and the new Grossology Exhibit and the Tinkertoy Zone and the 3D Planet You movie … We arrived to get the kids at 9 AM so we could be at the Center when it opened at 10 AM. As we drove away from their house, the brakes on our van started making noise! No - please not today. But those noises were definitely not sounding good. So our first stop (within a mile of the house) was an automotive place. One of the boys said, “This could ruin our whole day.” I told him only if he let it. We could have fun together no matter what happened. 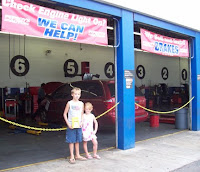 Lesson we learned: JOY is a choice. We are the ones who determine if our day is ruined or enriched.

We requested a brake inspection and then tried to be patient. The kids were not diggin’ this detour. We wandered the store aisles, the service areas, and the surrounding parking lot. It got a little more interesting when the van was finally hoisted and the tires removed. Doc and Nicholas continued to wait for the brake check while Brandon, Ashley and I went coin hunting across the street.

I was telling Brandon about searching for coins in cracks. He is a quick learner. Within a few moments he pulled a penny out of a sidewalk crack! (Coin #1). We were in front of the CVS pharmacy, so we quickly searched through there where Ashley picked up a penny by the registers. (Coin #2). 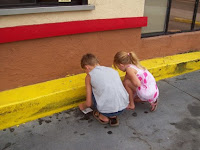 We were returning to the auto center, but could not resist walking past the Burger King window since there were no cars in line. At first I didn’t see any coins, but then found a penny. (Coin #3). Now we each had a coin. We were walking away when Brandon said, “There’s a penny in the crack! And another! And another!” He found a stick and started prying them out. We were laughing saying we were supposed to be diggin’ fossils at the Science Discovery Center, but instead we were diggin’ pennies! Brandon and Ashley “discovered” ten pennies in there! (Coins #4-13). Two even had yellow paint on them from when the building was painted last year - so they had been in that crack a long time.

At that point Uncle Doc and Nicholas were ready to leave. The brakes had been inspected and blown clean. The mechanic said they looked fine. Whew! 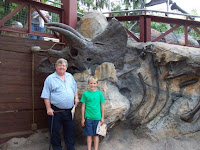 We arrived at the Science Center slightly after 11 AM. Found a dime as I was buying the tickets. (Coin #14). We headed straight to the Dino Quest and went diggin’ for clues.

The kids went non stop the whole day in running from one activity to another. They worked up considerable appetites. We found a penny when buying lunch. (Coin #15). Then Doc found another penny later in the afternoon. (Coin #16). 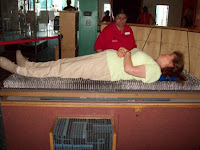 I laid on a bed of nails which then lifted me off the table. Doc quipped, "You are supposed to be DRIVING nails (at the new house) not laying on them!" The lady at the control lever said to let her know if the nails became too painful. She then said it was over! -- I was still waiting for her to get started! Doc quipped, "I always knew were a hard A##" and had a hard head. (The next person didn't complete the lift).

At 5 PM the Center closed and we began the drive home. The kids were not diggin’ the rush hour traffic. We learned so many factoids (like how much snot, farts, or belches your body produces in a day). But the most important lesson we learned today was that WE can choose if our day is ruined or wonderful. It is not the circumstances we encounter, but our attitude which matters.

We stopped for an all-you-can-eat dinner. The kids were definitely diggin’ it. Then, shortly before arriving home, Doc dropped the kids and I off so we could walk and talk the final few blocks. Have you ever noticed what interesting things come out when you go for a walk with someone versus sitting in a car or at a restaurant or more confined setting? I was definitely diggin’ it.

P.S. I DEFINITELY needed today’s Lesson because when we arrived home tonight there were some incoming emails which, uhhh…. Shall we say left me less than smiling.