Where did today go? It’s after midnight and there are so many undone tasks. 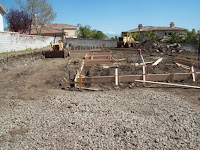 Doc and I had an afternoon meeting with a tax consultant. Paperwork. Stopped first at the property to check on construction progress. The foundation guys had erected quite a bit of formwork this morning. When we arrived they were on a break. So I used that opportunity to say thank you and tell them about the Penny Palace which they are erecting. Of course they each received a Penny Card.

The meeting with the tax guy went pretty well and we were home by late afternoon. I spent two hours working on a report for CPP. Then writing a letter for a student. More Paperwork. Doc went to the grocery store where he found a penny. (Coin #1)

When Doc came home he went straight to his man cave. After a long while he came in my office and asked, “What about your coin for today?” Eeks. Forgot about that! He grabbed a flashlight and we headed out.

Our first search spot was a self-serve car wash. I hopped out of the van and did a SingSong: “Penny Angels, Penny Angels, let’s have some fun. Please make it quick and get this job done!” Within one minute I had a penny, then spotted a second one. I called out to Doc and said, “Got my 2¢ worth, let’s go.” I walked over to him and there was a penny in my path. (Coins #2-4).

We decided to make a quick stop at the 99¢ store for address numbers and caution tape for the construction site. I bought supplies while Doc collected 2 dimes and a penny. (Coins #5-7).

That was 21¢ for him and resulted in a total of 7 coins for the day. Both ‘lucky’ numbers.

This evening was spent totaling construction receipts, generating spreadsheets (paperwork) and then wrestling with the software from the Loan Funding / Management Company. Last week I mentioned some glitches, so their IT guy has been working on those. I need to get reimbursement and also get some of the vendors paid. So far they have been working for Penny Cards and hugs, but I don’t think that will last much longer. Tonight I am testing things. The learning curve is steep and slow.