On the way to the construction site, Doc made his Starbucks stop. I walked passed the Chick fil-A window and was gobbling up coins when the cashier noticed me and said, “There is a big truck coming through”. My reply: “Yeah, I see him. Sure hope he sees me down here!” (Adrenaline Coins #1-6). Doc collected his penny on the way back to the van. (Coin #7). 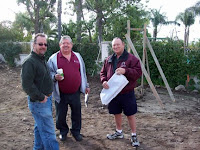 We arrived at the lot around 8:45 AM. We were to meet our structural engineer at 9 AM for his sign off. At 8:50 AM the city inspector arrived to review the concrete forms. He was not expected until the afternoon when the work would be completed. Surprise! All went really well. We asked him for any advice. His response: “Remember the 6 Ps”. Of course we asked for further explanation on that: “Proper Planning Prevents Piss Poor Performance”.

Side note: There was a beautiful green-breasted hummingbird on the lot. As we were meeting with the engineer, the bird was feeding at one of the vines climbing up the property wall. Good omen

On the way home, we stopped at a gas station / car wash to look for a quarter. No big deal, but would be fun. We only found two pennies. (Coins #8&9)

My brother called unexpectedly in the early afternoon. This is the brother who has the four kids we write about in our Play Times. He was going to be in the area of our lot and would like to see it!

We went to meet brother and were a few minutes early. What to do? Penny Finding of course! The 7-11 store had no coins inside, but Doc found three pennies outside at the gas pumps. (Coins #10-12). I walked over to the carwash and found a nickel plus two dirt pennies. (Coins #13-15)

We arrived at the job site at 3 PM expecting much commotion in preparation for tomorrow’s concrete pour. The site was locked up. It’s great to have a crew that is Prepared. What a blessing. 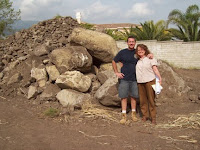 It was fun to have my brother on site. He and family will be starting to build their house next month in Tehachapi. The race is on …

We stopped to show my brother another house in the neighborhood. As we were standing in front of that house we collected three pennies - one for each of us! (Coins #16-18). That was a good omen.

Doc and I wanted that quarter for the day. So on our way home we stopped at a 7-11 store. There were four pennies found there, but no quarter. (Coins #19-22). I began walking to the self-serve car wash and said, “OK Penny Angels. One more place. That’s it, then I am going home. If you want a Hit for the Cycle story today, this is your last opportunity to provide it.”

There was only one car at the car wash. I walked through each bay and the surrounding area. Doc spotted a nickel in one of the drains under the metal plate, so he went back to the van to retrieve the chopsticks. That coin was a tool-assisted find. (Coin #23). I was walking away from the area when that single vehicle drove off. I was ‘nudged’ to look in the final wash bay. I argued, “Angels, why bother?” But I looked. There was a shiny penny and our quarter where that truck had been! What a revelation! Such fun! (Coins #24&25).

Note: the requested 25¢ piece was the 25th coin for the day!