Yesterday there was a storm of activities and it was pouring concrete on the lot. Tomorrow it is expected to pour rain there. Today we are between storms.

This morning I totaled my spreadsheet for the coins found so far this month. Doc noted an unusually high number of Hits for the Cycle and quarters.

We had an afternoon meeting with our tax preparer, so at noon we headed out. When Doc stopped at the first red light, I did not say a word, but had the strong THOUGHT, “I just know Doc will look out his window, but there is no way he will find a coin in that median strip since he looks there so often”. Doc immediately looked out his window and said, “Quarter!” and then reached out for it. Median Find, Sit-N-Find. (Coin #1) Sure proved me wrong. Can he read my thoughts?

The lobby of the building for our tax preparer is quite small and bare - except for some plants and two vending machines. Doc checked the return chute and collected a nickel! (Coin #2).

After our appointment as we left the building, Doc said, “Check the machines again while I go to the bathroom”. I had seen no evidence of anyone coming or going from the building, so I didn’t think there would be any coins. There wasn’t. But there was a bag of CHOCOLATE M&Ms in the chute which someone had left. That is worth $1.00 Chocolate beats nickel in my game!

Doc had some papers to deliver to son, Steve. We called and Steve was on his way to Target. So we met him there. The two of them had Starbucks coffees while Grandson, Ethan and I did a few minutes of Penny Finding. We found two. (Coins #3&4). 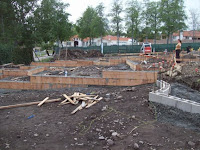 We were so close to the construction site. Just could not resist checking on it. Yup. The ten loads of concrete are still in those forms and hardening nicely. They haven’t gone anywhere!

On the way home we stopped at Trader Joe’s grocery. As we drove into the parking lot Doc said, “dime, dime, dime, dime, dime …” Once inside the store I checked the register area 3 times for coins. I found none. As we were paying Doc asked, “Have you already looked?” I replied, “Yes Dear, several times.” He took 2-3 steps and said, “I think that’s my dime by the foot of that customer!” Sure enough it was. (Coin #5)

There was a lesson: I did not get the dime (even though I was casually looking for coins) because I did not ask for it. Doc found the dime because he did ask and then acted accordingly.

That is pretty amazing. Sometimes we collect 30-40 coins and do not get a Hit for the Cycle. Today the Angels did it with merely 5 coins!