This morning Doc and Sparky tried something new for breakfast: Jack-in-the-Box. They came home with lots of calories and 2 pennies. (Coins #1&2).

I worked on tax prep and other things until 3 PM. It was such a gorgeous day. Needed to get out of the house. So Doc and I headed to Home Depot to investigate bathtubs, ceiling fans, medicine cabinets, and more. As we were wandering around, I said, “these Home Depot stores and the Lowe’s have been quiet deserted of customers on recent months. And they haven’t been good sources for coins.” Wrong! Within seconds there was a quarter in our path. (Coin #3)

As I was at the Service counter getting a price quote for the bathtub, Doc spotted something. He borrowed a yard stick from the paint department and used it to retrieve the supposed coins. Wrong! It was a washer. No luck there. But when he returned the yard stick, there was a penny at the base of the holder! Mushroom coin? (Coin #4).

As we were checking out, Doc said, “Do that again.” I asked “Do What?” “Say about not finding coins, so maybe we’ll find another one. I said it. While I was paying, Doc noticed several pieces of paper wedged in a very tiny gap between the counter and the pay machine. I looked and told him those papers were receipts and trash. Then I looked closer. One of them had potential … I was wishing for tweezers. Doc handed me his hair comb. A few attempts and within moments we had a very crispy, brand new $5 bill!! WOW! Angels really proved me WRONG!

Next we stopped for a quick dinner and then at the ATM machine at the bank. We could not resist the temptation to quickly run through the grocery store. The manager asked if I had found coins yet today. I was telling him about the $5 at Home Depot near the change chute and as I was speaking with him we found a nickel! Love it when the Penny Angels manifest coins for other people to witness. Doc also found 2 pennies there. (Coins #5-7).

At 8 PM Doc announced it was time to do the weekly grocery shopping. I didn’t want to go, but the fridge is pretty empty. We didn’t see any coins inside the store and said “No coins at this stop.” Wrong! As we walked through the exit doors, Doc and I both veered to the right instead of going left toward the van. We laughed. Sure enough, there was a penny a few feet in that direction. (Coin #8)

We needed a dime to Hit for the Cycle. At the second and third grocery stores we found zero coins, yet we both really wanted that dime! So I said, “Dime, dime, dime, dime ….” for 2-3 minutes as Doc began driving home. We detoured into a 7-11 to get that dime. As I opened the van door, there was a penny by my foot, then a second one. (Coins #9&10). I went inside. I could see two coins under the counter … could it be? Yes! A quarter and a dime laying next to each other! (Coins #11&12) I also claimed a penny under the counter (Coin #13) and carefully looked around. I was sure there were no more coins under there. I got off my knees and told Tony (the cashier) how the Universe had just fulfilled our request for a dime! Suddenly there was the shiniest shield penny next to me! (Coin #14). Tony and I were laughing. 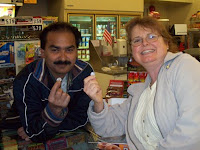 I stepped back and noticed something under the counter where I had searched closely. It was a second dime! Wow! Mushroom coin! (Coin #15). WRONG again!

As we returned to the van, there were 2 pennies right at my door. I must have stepped on them when getting out of the van! (Coin #16&17).

Thought: Why don’t we ask for assistance on the really big things in our lives instead of for merely finding pennies?

Do you think the Penny Angels can make the loan docs sprout up like a mushroom, would be nice.