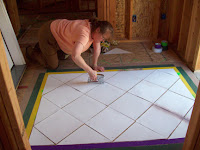 Doc was determined to be on site first thing this morning and provide coffee to the crew. I didn’t think most of the guys drank coffee, but he insisted. As he obtained the Starbucks Traveller’s coffee pack, I walked next door to the Carl’s Jr. drive through and obtained 2 quarters. Good start for the day. (Coins #1&2).

Once again it was a busy day on site. Many smaller projects getting completed. Doc cleaned up in the Master Suite area, I re-layed the entrance tile rug. This size looks better - and I taped penny inserts in the corner of the tiles.

Those two windows which were intended as sidelights for the main door, have now been installed under the house to allow light into the Dungeon. 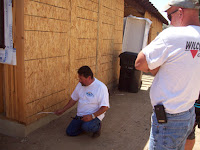 The stucco crew was setting up scaffolding all day. That is a lot of metal. Plasterer Tommy met with Danny, Concrete guy Rick and Doc and I. There are at least a dozen action items to complete before he can begin working. We were told we need a metal sheeting guy to prepare the patio and front door areas and then a decking guy to prepare the deck area. HVAC needs to flash the air vents and Danny needs to do some blocking and sheathing. Much to resolve before stucco can begin.

Four doors were installed today, two need to be removed. The detached garage door and the laundry room door are OK. The Master Bedroom door to the patio needs metal flashing under it. The front door (the important one) was hung today. I was thrilled - until I realized it pivots the wrong way! It was 3:00 p.m. but we quickly made a call to the manufacturer. If we get the door into the shop Monday, they can re-hang it in 1-2 days.

We had a 3:30 meeting at the cabinet shop. Reviewed cabinet designs until after 5 p.m..

We were driving home when I asked Doc if it was OK to write a Penny Tale with zero pennies today? He did not like that idea. So we stopped at a 99¢ store. Two pennies before we entered the store, one penny as soon as I walked in, two pennies and one nickel on the floor when paying for our items. (Coins #3-8).

Came home and realized that several plants in our back yard were nearly dead. Turns out the water line was broken in several places. Not a job we wanted to tackle after a long day, but the next two days are expected to be equally as full. Ahh … the joys of owning a home.