Last night I went to bed slightly before midnight. It seems if I go to bed before 1 a.m. it just screws up my body clock. I awoke ready to start my day and undertake some things. Then I looked at the clock which read 12:36 a.m. Guess I’ll try to sleep a little more.

This morning we were up and getting ready when the phone rang at 7:30 a.m. It was the rep from the window company saying “I’ll be on site in an hour to deal with your window screen issues”. I had planned to be somewhere at 9 a.m., but plans got changed. Doc and I quickly finished things at home and headed to work. 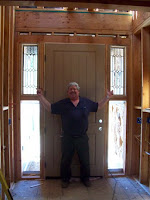 The window guy was great and even fixed one screen which was not one of his. I thanked him for his ARK and gave him a Penny Card. While I was working with him, Doc headed out for coffee, breakfast and two pennies. (Coins #1&2). 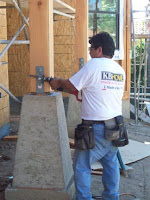 There was a full crew working on framing today. Many things on our Check-Off list were finally completed. When the crew took a break for lunch, Doc and I headed out to get some bottled waters for them. We stopped to drop off payment at the sheet metal company. We could have mailed the check, but with the holiday weekend coming, we wanted to make sure they were paid promptly. As a reward for doing that, we found a quarter when we returned to the van. (Coin #3) Doc said. “It just feels like there should be a penny here, keep looking around.” I searched the parking lot area and then the planter. I found two coppery colored washers, but no coins. Doc still felt a coin, so I kept looking. Sure enough, back under the plants there was a semi-buried dirt penny! Then a second one. Doc’s intuition was accurate. (Coins #4&5).

We next went to the grocery store for a case of water. Two pennies as I walked in, then a quarter and a penny in one aisle, then a penny at check out. (Coins #6-10).

We then stopped to get lunch for framer Danny. There was a penny on the freeway offramp. (Coin #11) 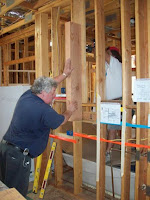 The Porta Potty got cleaned today. In this heat, that is always appreciated. 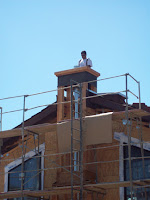 The cabinet maker was not able to create what I wanted using the pre-fab cabinets, so Doc and I designed our own glass shelving system. Jaime helped Doc mount the two kitchen posts which will suspend the glass shelves.

We were surprised by the fireplace guy who showed up to install the chimney shroud. One more item completed.

We put in a full day at the jobsite, then locked the gate. On the way home we stopped at Home Depot for supplies and a gift. This morning Doc had said, “Today we need to get some toilet paper”. As we were walking down the aisle at Home Depot, a worker was taking down a display of toilet paper. He was up high on a scaffold tossing several packages down right in front of where we were walking. Doc and I both started laughing, “Manifesting!” “Toilet Paper from Heaven!”

When we returned to the van I approached on my side and said, “Penny Angels, I am surprised at you. I really felt you were going to have a coin here at Home Depot.” I said that and Doc said, “Tina, come look over at my side of the van.” Sure enough, there was a penny by his door! He wondered how he could have missed it when getting out of the van. (Coin #12). There was the answer to my request.