This morning (as usual on Sundays) Doc asked me to go out for breakfast with him. I told him we played all of last weekend, this weekend we needed to catch up. He was not permitted to even speak with me until I was through with one major Paper Pushing task which I was supposed to have completed by February 2. After several hours of waiting around for me, Doc went out on his own. 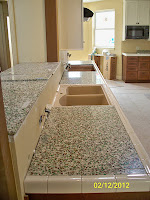 It was somewhat good that I had five hours of uninterrupted work time. By noon, though I was tired and hungry for breakfast. I took a break to find Doc’s “love note” on the dining table.

Doc returned early afternoon. He had been out to breakfast, then to Rental #1 to check on it. A stop at a 7-11 store yielded 3 pennies (Doc Coins #1-3). He found 3 quarters in a newspaper rack where he stopped to buy today’s paper. (Doc Coins #4-6). He also made a brief stop at the Penny Palace just to check on things. The upper countertop pieces were delivered yesterday and laying in place.

We had a list of 48 Tasks I hoped to complete this weekend. I switched into serious ‘got to get these done’ mode. Doc retreated to the Man Cave with the dogs and the TV. It was irritating that he was ignoring all those critical items, but it allowed me to continue uninterrupted with the Paper Pushing.

After 11 hours of paper pushing, I needed a break. At 7:30 we headed out for our weekly grocery shopping. At the post office we mailed the wad of bills I had paid. The first grocery store netted Doc a penny and dime outside, two pennies and a dime for me inside before starting our shopping, then a penny at check out. (Coins #1-6).

The grocery store had quite a nice selection of Valentine’s Cards, so Doc and I spent a few minutes Paper Pushing. We would read and show each other various cards which were appropriate.

When leaving the store I said, “Look Angels, You were supposed to get me that nickel. It makes for a much better Penny Tale to the readers when you perform as you are supposed to. I don’t plan to go home without that nickel tonight! I will give you one more chance to produce.”

On the way home Doc pulled into a convenience store. I found two pennies in the parking lot. (Coins #14&15) “Angels, thanks for those, but I am serious about wanting a nickel tonight!” I went inside the store. There were no other customers. Unusual. I spotted a penny on the floor by the register, then a second one. As I collected those, I spotted a dime. (Coins #16-18). The cashier asked what I was doing. I told him, “I am hunting for a nickel to complete a ‘Hit for the Cycle’ today.” Since there were no other people in the store, I got down on knees and looked under the counter. There was a nickel!!! (Coin #19) I emerged to show Doc and the cashier. JOY moment. We were all laughing. And suddenly several customers came in and the store was busy again. It was if things had been suspended for those few moments so that I could find that nickel.

An entire day of Paper Pushing. Not fun, but much-needed. By 11 p.m. I was able to see the top of my white table again!