Up and running at full speed after only 3.5 hours of sleep. Much thanks to the 19 Stakeholders and Other special persons who are “fuelling” this journey.

Phone meeting with Pat, the Advancer to assess the progress on Guidebook, logo, media kit, website, Charity link, and other things. Whew!

I forwarded it to a few people for feedback. Doc asked Why I was doing that. “Because I want to see how others react to it”. He said we needed to make a quick decision and not wait around for a bunch of people to respond. I said I wanted the opinions of TEN persons. If 9 of them liked it, we would go ahead with it. Guess what? Exactly TEN persons have responded today and 9 of them liked it! Coincidence?

Next, there was the cover of the Guidebook. First draft arrived mid-morning. I was really uncomfortable with how he had my name and one other sentence did not “feel right”. But three revisions later we got it!

At 4 pm Doc said it was time to hunt down a coffee -- and some coins. I agreed - if I could stop to make a care call while we were out. (One of those ‘nudgings’ again).

So we devoted the next two hours to coffee, coins, TLC and dinner! Could I just leave it at that and say we got 16 coins?

Didn’t think so. Some of you are sooooo demanding! Here goes ….

We were headed to a high school parking lot (not the same as yesterday). But then we figured it was getting dark and the 7-11 was a target rich environment. So much for any exercise. Initially I didn’t see any coins, but then the 3 customers left and the store was vacant except for Tony the friendly cashier. So I got down on both knees and practically stuck my nose under the counter to retrieve a penny and a dime! Tony and I were both laughing. (Coins #1&2) He wanted to see how my new voice recorder worked. J

Meanwhile Doc searched the self serve car wash next door and came back for the chopsticks we now keep in the car for this purpose. Doc had found a penny in the drainage grate about 8” below the surface. Tool Time. It took me about 10 attempts before I realized I should use the squared ends of the chopsticks versus the normal round end of them. We were laughing at the ludicrousness of all this effort for a penny. (Coin #3).

Doc next demanded his Starbucks coffee. This one was not any of our typical stops. Ooo! New territory. No cars, wide open! I spotted a shiny new Lincoln Professional Life penny from about 40 ft away! And then a second penny. (Coins #4&5) 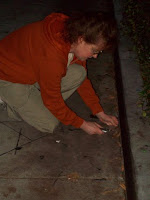 But wait. Deep crack. Look carefully. There was the tiniest sliver of something silver. But the entire coin was so deep only the top edge was showing. Tool Time. Pocket knife on this one. A Quarter! Coin #6). The window attendant looked out and said I had startled her. I explained and gave her a card. She smiled. Said she would log on and add her grin to the Smile Counter on the website.

We made the TLC delivery and really should have gone straight home. Doc had at least 8 more hours of exam grading to do and I had numerous emails and things to address tonight. BUT we both had PENNY FEVER!

The Vons grocery store was on the corner … Detour! I stopped to chat with Raphael the Salvation Army bell ringer. Very friendly. I told him that we shared a common interest - collecting coins! I was going inside to find some.

Inside the store I spotted a dime in the midst of a very busy check out line. What the heck. “Excuse me, I write Penny Tales and there is a coin underneath you all …” I shared the story, retrieved the dime and then a penny, left one business card and retreated. But I noticed several people looking at the card and went back to distribute more! Such smiles! (Coins #7&8)

Doc got his throat lozenges and was ready to pay when he realized he would save a bunch if I used my discount card - which was in my purse in the car. So I ran out (stopping momentarily to grab a penny in the coin return chute of a closed check out line). I returned as Doc was paying - and I retrieved another penny by the cashier. (Coins #9&10).

I stopped to give Raphael some change and told him about the coins I had found. Successful Hunting.

Doc and I now had all but a nickel to Hit for the Cycle. We started saying, “Nickel, nickel, nickel …” 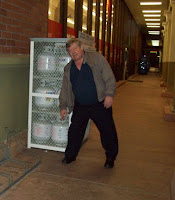 So we headed for the CVS shopping center … a penny by the bike racks. Doc bent to retrieve that one and we noticed a second one, then a third one right where we were standing, and a fourth one next to us! (Coins #11-14). We went into the store where I immediately spotted a dime (Coin #15).

We were laughing. “Penny Angels we requested one 5¢ coin, not five coins!”

Was it Penny Fever? Fun and Frivolity? Or just avoiding the exam grading, house chores and emails?

OK. One more store to look for that nickel. The Stater Bros. groceries store was very busy, but I spotted a dime. (Coin #16). Waited for a clearing, then swooped in. A lady nearby said, “Wish I would have seen that first. I collect all my coins and save them in a jar for a special family trip”. I gave her a card and she said she would log in to add her smile and maybe share her story.

We next stopped at a favorite deli. The owner told us that yesterday he spotted three coins on a freeway off ramp. He hopped out and retrieved them. Penny Fever is contagious and spreading rapidly. Yipee!

Thought: We requested one nickel from the Penny Angels and we were disappointed because they did not give us “what we asked for”. Instead, they gave us Four Pennies and TWO dimes. That is NOT a nickel, yet it is nearly FIVE times the value of what we asked for! Time for an attitude adjustment? Should we be looking at this differently? Does the phrase ‘Attitude of Gratitude’ come to mind?

This is one of your greatest blogs - especially considering you almost just said "found 16 coins." I'm very glad I read it, for this is the first news to me that the logo design was approved! 9 out of 10 isn't bad. People really like the business card it seems. We'll really blow them away with the new ones that contain a penny! (Or will you have 2 versions - one with, one without?)
Back to finishing the guidebook...