Doc suggested that we look for today’s penny on the way to school. He stopped at the Starbucks inside a grocery store. Neither of us found a coin.

We headed across the shopping center parking lot; I was on foot, Doc was driving in the van. I glanced at the outdoor patio of a pizza place. I had looked there many times, but never found a coin. Today there was a penny! I signaled to Doc and he drove over to where I was. 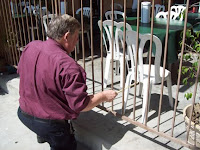 The coin was several feet on the other side of a railing, so I used the arm-extender tool (back scratcher). I was sill a few inches short, so I tried using Doc’s longer arms. His big shoulders prohibited his reach. So these two smart monkeys used the arm extender to rotate the plastic chair ever so carefully and then used its weight and leg to drag the penny forward! My prince presented me with the conquered penny “Just 4 U”! (Coin #1).

Doc headed to CVS to take his blood pressure reading. I have not been finding coins lately at the CVS stores, so I headed to the 99¢ store. Doc emerged with his 1¢. (Coin #2). It must have been there “Just for him”. I questioned why he had not picked up the two pennies just outside the store? He did not believe me because he had searched that patio area prior to going in the store. Guess those two pennies were meant “Just 4 You, not me”. (Coins #3&4).

At school I found 1 penny at the Subway counter as I was walking past it. (Coin #5) I had the opportunity to share Penny Finding with two people and give Penny Cards .

At the grocery store on the way home, Doc was walking in front of me. He bent over and I nearly crashed into his bum. He was retrieving a dime in his pathway. A coin “Just 4 Him”. (Coin #6). Inside the store I found a penny under the coin counting machine. (Coin #7)

Thought: Coins can be blatantly obvious for you, yet no one else seems to notice them. I guess we each have something special for which we have been called to recognize. No one else can fulfill that role. There is a special mission along with blessings in store Just 4 You.