This morning I was awaken around 3AM by the boxer dog next door. She once again decided to “bark the night away”. So for the next few hours she barked at the darkness until the sun came out to rescue our ears. I got a very early start on my task list for today. I did keep calling the phone number of the owner for the lost dog - every hour throughout the night.

At 8 AM it was time to check on big black dog. He was still there. So I fed him, let him investigate the back yard, then he helped me vacuum the garage. Once the Humane Society opened, I called and this time they gave me a second phone number for the owners. I called and left a message. Within minutes, Chris called back. He had been searching for Merlin since early yesterday afternoon. He was soooooo relieved to hear that Merlin was safe. (Not just safe, but he had been walked, massaged, served lunch and dinner yesterday, then breakfast this morning). 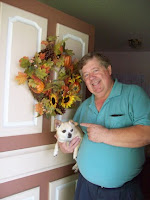 I asked if Chris could make it to our house within 20 minutes since we had an 11:30 meeting. He said he would be here in 2! It took him less than 5 minutes and he was on our doorstep.

When Doc answered the doorbell he had our dog Sparky (a Chihuahua) in his arms and asked Chris, “Is this the dog you are seeking?” It was good for a laugh.

Chris and Merlin were reunited. Happy Tails for Penny Tales.

Heck, today’s coin finds were fun, but can’t match the JOY in watching such a Happy Tail. 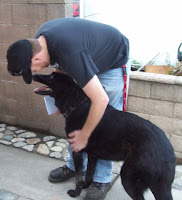 Doc found the first coin of the day when he went to McDonalds for breakfast. (Coin #1 - a nickel!) This afternoon when I ran out for errands I found my coins. First I took Dundee to get his nails trimmed. I quickly popped into the next door grocery store strictly to look for a coin. Sure enough, there was one in a check out lane. It was too awkward to go against the traffic flow and try to get it, so I made a $4 purchase in order to get my penny! Not a good ROI (Return on Investment). (Coin #2 - which was a 1944 Wheat Penny). 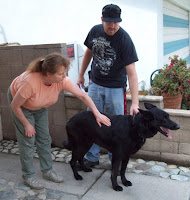 At the 99¢ Store there was a penny at check out and one hidden way under a display rack. (Coins #3&4) As I emerged from the store, my truck was to the left. I was “nudged” to step out to the right. There was a penny a few steps in front of me. (Coin #5).

At CVS Pharmacy there was a penny underneath a lady in purple who was sitting on a bench waiting for assistance. (Coin #6) I asked her permission to reach under the bench for a penny. She said, “Of course! That will be good luck for you.” I gave her a Penny Card for sharing the JOY. There was one more penny inside the store. (Coin #7)

The wheat penny doubles your ROI.