Our primary objective this morning was to meet with a consultant regarding doors and windows. Shortly into our journey we were stopped at a red light waiting to proceed onto the overhead freeway. Doc spotted several pennies and a bottle cap in the median to his left. We were in a hurry, but made note of them for possible later retrieval …

We drove the 65 miles to Murrietta. Traffic was great and we arrived 25 minutes early. Doc, of course, went to Starbucks. I walked the parking lot saying, “Angels show me a Penny so I can share Penny Tales with A.H. when we meet with her. She would like that”. Within a few feet there was a beautiful, shiny penny in a parking spot. (Coin #1).

Wireless Communication: I walked to the other side of the parking lot and was voice recording my find. I looked back to realize the penny had been found in front of “Verizon Wireless Communications”. I was laughing and said out loud into the recorder, “So Angels, are you trying to communicate ‘wireless’ with me?” At that moment there was a nickel at my feet! (Reminder that nickels are the rarest coins to find). (Coin #2). Now I was Really Laughing! “Good morning Angels! Today is going to be a good day!”

We entered the store to meet with A.H. We were told she had an urgent medical situation which had needed immediate attention. Therefore she would not be in -- for a few days. Of course we were disappointed, but when we understood the situation we realized she needed TLC and prayers. Our lost time was trivial in comparison to her situation.

Doc and I used the time to investigate rafter tails, water heaters, etc. Then we had lunch at a little café. Doc went next door to the grocery store to use the bathroom. While waiting for him, I found a penny. (Coin #3) 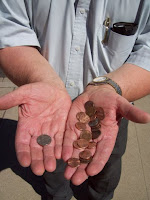 Halfway home Doc decided to stop at Lowe’s for more research. As we were exiting the store, Doc stopped me from trampling a dime! (Coin #4) 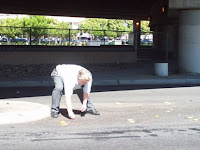 As we were driving down the freeway, I suggested we go back to the freeway underpass where Doc spotted the pennies this morning. If it was safe, maybe we could retrieve them. Doc said, “We just need a quarter to ‘Hit for the Cycle’. If that bottle cap could just be a quarter instead …” I replied, “Just exercise The Law of Alchemy.”

We arrived at the freeway underpass and tried to find somewhere to park. There were chainlink fences next to the street and no stopping zones for blocks around. So Doc parked on the sidewalk for a few minutes while I hopped out. I asked him to take a picture. I was hesitant in cutting through the traffic, so Doc handed me the camera and went across! He gave me hand signals -- 4 coins, no 5, no 6 …. Then he just kept gobbling up coins. Then he shouted, “The Quarter!”

Doc returned to the van and we immediately hopped in and took off. I counted …. 21 pennies and one quarter (no bottle caps). Wow! Coin Mine! (Coins #5-26).

Next we went to school/work to pick up some papers. There was a young bird bashing against the window of the two-story atrium trying to get out. He didn’t realize he needed to fly back down to the lower level to escape. I tried to assist him, but he did not understand. He flew away from me and even higher.

Thought: Are we like that little bird and don’t realize when a loving source is trying to help us? Do we protest and think we know better? Are we too scared to let those hands help us? Do we fly even higher and away from where we need to go in order to really be free?

I was working on the computer for a while and wondered where Doc went. He opened the door with gently cupped hands. “This little bird is exhausted, I wonder if he can fly”. Doc released the bird in the garden and said the little one immediately took joyous flight. The bird allowed loving hands to help it.