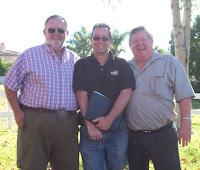 Today was exciting. At 8:30 we had the Pre-Grading meeting with the City Grading Engineer (Matthew), City Inspector (Mike), Project Manger (Daryl), Grading Contractor (Craig), Soils Engineer (Roger) and Doc and I. I had my camera in my pocket to get a photo for you, then was so busy taking notes, that I forgot to take the photo with everyone! I did manage a photo at the end with the stranglers (Rev. Roger, Daryl and Doc).

In the morning on the way to the property, Doc of course stopped at Starbucks. I walked next door to the Carl’s Jr. window and collected 2 pennies. (Coins #1&2).

The Pre-Grading meeting went very well. I am anxious to begin working with this team.

After the meeting Daryl (Project Manager) treated Doc and I to breakfast. There was a penny as we entered the restaurant. (Coin #3) Then we stopped to fuel the van. Collected a dime and three pennies around the gas pumps. (Coins #4-7).

Doc went to CPP to check in, work on his grades, and review graduate applications. He found one penny at McDonalds on his way to campus. (Coin #8).

As far as the City is concerned, we could begin work tomorrow.

The hold up now is the bank. US Bank says they are understaffed and behind on things. They may not get funding until January! Anyone out there have connections?