This morning I hopped out of bed, fed the dogs and began working on New House Stuff. At 2 PM realized I was still in pajamas! I showered, changed, pulled together plans and lists, then headed to a 3:30 appointment at the lighting shop. The sales person looked at our lighting plan and said it had “quite a few places which he was concerned about”. He suggested that a lighting specialist be consulted to work over our plans. Not good to hear at this stage (after City approvals, etc.)

Since I didn’t have any coins yet today, it was time to head to the nearest shopping center. I called Doc and left him a voice message saying, “I am in front of the CVS Pharmacy. I am not Penny HUNTING, I am Penny FINDING. I intend to go inside and find a coin.” I walked in the door and right in front of me was today’s penny. As I looked around further, I found a dime, then a nickel! (Tina Coins #1-3).

I walked outside and left Doc a new message (at HOME). “Doc. It has been 3 minutes since I last called you. I just found 3 coins. We just need a quarter to Hit for the Cycle”. Doc called me back a few minutes later from his CELL (Not having heard my message at home). He had been out shopping and getting steps on his pedometer. He had a penny from the Circle K Store where he stopped to get a lottery ticket, then a quarter in front of the bank! Penny Angels were providing! (Doc Coins #1&2) 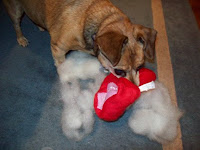 I stopped at a discount store to look for an item which I did not find. Did get one penny and one dime there (Coins #4&5) Bought a fuzzy toy for my Dachshund, Norman. He is so proud and joyous when he “kills the wild beast”, rips out its “heart”, and presents the lifeless carcass to me.

Thought: Norman attacks his mission with gusto (defined as: enjoyment in doing a thing, zest). Maybe that’s a good way for us to tackle our challenges.