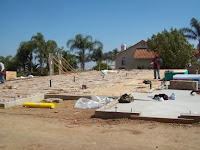 The day was simply MAGICAL! There was progress, joy and laughter all day.

Doc and Sparky collected their penny and breakfast at McDonalds, then Doc and I headed for the jobsite. The insulation was FINALLY being installed. It’s strange. I brought some Penny Palace magnets to the jobsite today. I was ‘nudged’ to walk over and give one to the insulation guys. My logical side kicked in and argued, “You really think these guys are going to care about Angels? Don’t bug them when they are working. Do you think you’re going to just walk up and start talking about the Magic of the Penny Palace? Guys like that aren’t going to care about sappy stuff like found pennies.” How many times have we learned this lesson? Listen to the nudgings! Don’t use your reasoning. I went over to take pictures. I met Kerry from San Gabriel Insulation and 5 minutes later he had a Penny Card and Penny Magnet. He was sharing some ‘good news tales’ of his own with me! 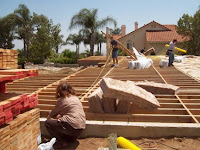 At 11:30 we met Truss Greg at the airport. He flew in from Wisconsin on his own time to see the construction site and ‘wrap up’ this project. From the moment we met it was hugs and Joy. He has been working with us for 4 years and it was good to finally meet him. Emails are OK, but nothing compares to hearty hugs, genuine smiles and just plain silliness together!

We stopped for a quick lunch, then were on the jobsite for our 1 PM meeting with Framer Danny and Project Manager Daryl. Great time going over the plans and framing details. We actually had fun taking measurements - like kids on a playground! Magic Moments. 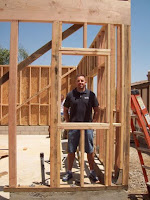 Truss Greg is the one who proposed the addition of the window over the garage toilet. It has been dubbed "Greg's Dunny Window. 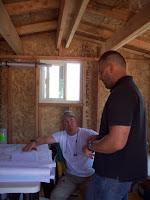 By 3:30, Greg’s work on-site was completed. He will now tweak the truss designs slightly and get those trusses into production. The trusses will take 7-10 days to manufacture, then they will be trucked in from YUMA. The trucking fees are actually less than California sales tax.

It was now time for coffee. Doc took Greg to Bad Ass Coffee as a change from Starbucks. Since I had not found a coin yet today, I wandered next door to the CVS Pharmacy. Found two pennies under the photocopy machine. (Coins #2&3). Now it was a challenge. The guys found a nickel at the grocery store. (Higher value than my 2¢) (Coin #4). Then Doc spotted a dime which I retrieved for him. (Coin #5). Greg was laughing at this silliness. Of course we all realized, “We still need a quarter!” 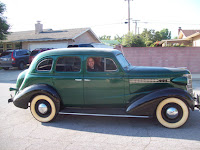 We brought Greg to our current Pomona house and gave him the tour. Then Doc took him for a ride in the 1938 Chevy. After that, we had a really delicious Peruvian dinner and returned to the house to review more house design concepts.

At 8:30 PM it was time to head to the airport. Doc and Greg insisted upon a Starbucks stop. Doc asked which one to visit? My reply: “One with a quarter! We chose a Starbucks right off the freeway. Greg wanted to go inside to get his order and be able to add the condiments. I was a little disappointed because I wanted to use the drive through in order to look for coins. That Starbucks has always had 4-10 cars in line at the window. While the guys were ordering their coffee, I could not help but walk around back through the narrow drive lane. There were no cars there! Magic! Unbelievable! I saw several shiny dots and thought “liquid drops from engines, but might be a coin there.” I walked closer to discover a dime, then another, then another …(Coins #6-8). Headlights were approaching and I needed to get out of there before getting run over. But there were two more dimes and a penny! (Coins #9-11). Now the car was getting too close. I said, “Thanks Angels. I really wanted a quarter to show Greg how this works, but 5 dimes is not too shabby.” I turned to make my hasty retreat and there was a quarter under the window. (Coin #12) Magic!

Greg flew into Ontario (15 minutes from the job site), but his return was from LAX. Uggggg. That place was very busy even on a Friday night. There was a HUGE line for luggage check in, but thankfully Greg had no luggage and already had his boarding pass. Within moments of entering the terminal we found the security area, he gave me a quick hug and disappeared! Magic.