There is an oldies song “Torn Between Two Lovers”. Today I was torn between two Loves -- and neither one was Doc!

We awoke at the hotel and headed outside to the hot mineral pools. We were able to hide in the shade of some trees for an hour, but after that, the pools were in full sun and we were out of there. Breakfast time. 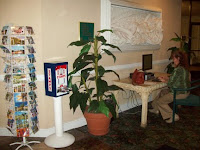 During breakfast Daryl texted to say that the City Inspector had signed off on the insulation installation and that it was raining on site.

After breakfast we had an hour until we needed to check out. I was really torn. In the lobby was a good-size desk with a computer station AND a tall rack of post cards with a stamp dispenser next to it! Two of my favorite things -- checking emails and sending postcards. Which to do? 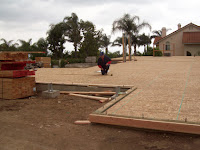 We eventually did check out and headed home. It is a 90 mile drive and neither Doc, nor I like driving long distances, so there were three stops along the way. The first was Hadley’s Fruit Orchard; no coins, plenty of snacks. The second stop was a gas station. Coffee for Doc; penny for me (Coin #1). The third stop was at the construction site. Danny and crew were working.