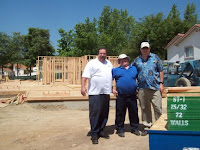 How does each day fly so quickly? The clock says 10 PM and I haven’t even attempted most of the things I planned to do today.

There were a few errands this morning before we went out to the jobsite. Doc stopped for a coffee while I went next door to purchase filtered water for the construction workers. I found a dime (Coin #1).

Our 10 AM meeting with the Heating / Air conditioning guy was great. He brought up many things we need to think about while framing. He is the brother of one of our first solar car raycing students who now teaches at CPP. Photo shows Steve (HVAC contractor), Doc, and Kevin (former student, now faculty).

Doc and I stopped for a quick Mexican lunch. Found a penny and a dime. (Coins #2&3). 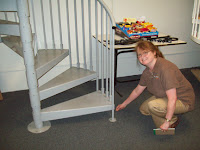 We got on the freeway heading to school, but then realized we were just one offramp away from The Iron Shop. We got back on the freeway going the other direction and ‘played’ for a while on the spiral staircases in the showroom. As I entered the store, I had the thought, “Glad I have already found coins today, because we are not likely to find any coins here.” A few minutes later I was ‘testing’ the staircase we plan to use. Doc spotted a penny underneath it! Guess the Angels were saying “Yes! Stairway to Heaven here.” (Coin #4)

I picked up the penny and the sales rep said, “I remember you, I still have your Penny Card from you last visit right here on my desk!” He was talking to Doc when I noticed a penny leaning vertically along the wall at the edge of the carpet. Then Doc noticed a penny between a table and the wall. When I picked up that one, there was another one under the table. While I was down on hands and knees, there was another penny under a nearby desk! We were all just laughing at the Mushroom Coins as they popped up around us. (Coins #5-8)

When I exited the store, there was something shiny under a big truck. I bent to get it when Doc said, “What are you doing? The penny is right underneath you?” I hadn’t even seen the penny! 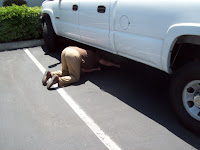 I was diving for the quarter, then the dime. I still don’t understand how that quarter could have “shone with light” when it was under the truck in the shade! (Coins #9-11) 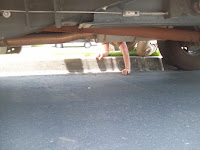 This afternoon Doc went to get an oil change and car wash for the van. He also collected a burger and 3 pennies at McDonalds. (Coins #12-14).

I spent much of the day with the invitee list and emails for the upcoming solar car team reunion.

Thought: Many of our ‘pre-conceived ideas’ are wrong! (Like saying I was not likely to find coins at that shop). How much of our day is influenced by our very limited thinking?