At 8:15 this evening I was ‘nudged’ to call someone. That surprised me and I resisted at first, but then gave in. I called. “Hi CD, it’s Tina. This is a care call. Are you OK?” He replied, “Who told you? I have been really sick!” I said, “The Angels”. He said, “Thanks a bunch! I will talk to you when I feel better …… bye for now!” In 60 seconds the Angels were able to extend JOY. 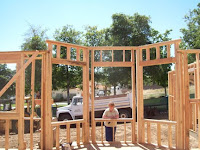 This afternoon Doc and I headed for the construction site. There was a burger place along Route 66 which I had never ‘searched’. There were no cars at the drive up window, so I hopped out of the van and ran past the window to collect today’s penny. (Coin #1).

By the time we arrived at the site, the framers had left for the day. Looks like they added many diagonal braces on the walls.

When driving away from the site Doc said, “I am going to get a coffee, where shall I go to give you coins as well?” I was nudged to a Starbucks which we had not visited in several months. When we arrived, I questioned my decision. There were six cars in line! (Negative thinking). With the long line, we had the opportunity to slowly and thoroughly search the planters and approach. (Positive thinking).

Doc had a Sit-n-Find penny as we pulled up to the end of the line of cars. (Coin #2). After he ordered, he spotted a dirt penny in the planter. Even after he verbally guided me to it, I still could not see it.

Lesson: Sometimes other people’s vision can assist us accomplishing our objectives.

I then spotted a penny, then another. (Coins #3&4) The lady in the car behind us asked me what I was doing? I ran back, gave her a Penny Card and explained the story. Then I spotted another four dirt pennies and held them up for her to see. She smiled. Shared Joy! (Coins #5-8)

Doc collected a dime and a nickel at the window. (Coins #9&10). As we drove away from the coffee shop we were stopped at a red light. Doc looked to his left and said, “There’s a penny, and another, and another!” But this was a fairly major intersection with 6 lanes and a freeway onramp. The light had just turned red, so there was some time. Doc could not resist. I saw him diving again and again… He returned with NINE pennies and a dime! That was a Mega-Median Find. (Coins #11-20).

I also discovered a dime in the shoes I wore yesterday. Must have been a find somewhere in the day.