The best part of today was not the coins found, but the Dance with the Dragonfly.

Before Doc would undertake any projects today, he had to go to McDonalds, then Starbucks. Again, he insisted that I go along L At McDonalds (different one than yesterday) I got out of the van and walked through. Did not see any coins at the first window. Doc rolled up, open his door, and retrieved a penny! It just appeared for him. And then he found a second penny! But I had already looked there! Not fair. I proceeded to the second window. No pennies - but three quarters! I win! 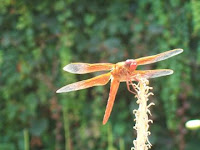 At home we were doing some yardwork and I was getting impatient because we were almost 2 hours behind on the schedule I had laid out for today. I turned around to see a brilliant orange dragonfly. The dragonfly landed on the tip of a reed and I was mesmerized by it’s beauty. Time stood still for the next 20? minutes??

Although I have seen a few dragonflys in our yard, it is not a common occurance. I had never seen one with those colors. A colorful live model of our Penny Finding mascot. J Dragonflys symbolize …(* see below). 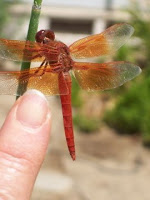 I watched as the dragonfly flew away, returned, flew away, returned several times as if he were dancing with me. I ran inside for Doc’s newer camera. Doc took a few pictures of the creature as it flew off, then returned several more times. I was not satisfied with those photos. I ran inside for my camera and hoped the dragonfly would still be there when I returned. He flew off then returned at least a dozen more times for me and landed in several places. We were dancing in the back yard from spot to spot. I was able to shoot 16 photos -- each time getting just a little closer. Finally I was able to touch him! Three times! Isn’t he beautiful?

Doc and I drove to the hardware store for sprinkler parts and other things. We were talking to the guy at the Service Desk, but my eyes were focused on the coin behind him. I finally told him about Penny Tales and asked if he would retrieve that coin for me. J He did. It was a dime! I was then able to focus on our discussion. A little later in the store I found a dime in the patio furniture area. (Coins #7&8)

While Doc loaded our purchases into the van, I quickly ran over to the office supply store to get something for work. I got the item and was headed directly to the register when the nudging said, “walk down the next aisle instead”. I did. There was a penny by the battery display.

After several hours of running errands, I was pooped. As we approached the house, Doc decided to go for a snack! I insisted he drop me off first. He went solo to Taco Bell and returned with a quarter.

"They are fantastic flyers, darting like light, twisting, turning, changing direction, even going backwards as the need arises. They are inhabitants of two realms - starting with water, and moving to the air with maturity, but staying close to water.”

“Dragonflies are reminders that we are light and can reflect the light in powerful ways if we choose to do so. Let there be light is the divine prompting to use the creative imagination as a force within your life. They help you to see through your illusions and allow your own light to shine in a new vision.”

"The Zuni people place great store in the mystery and magic of the dragonfly as a symbolism of whirlwind, swiftness and activity. The wings are transparent suggesting that change can be an illusion. In other words, if you remain stuck in your ways believing that it is the right and safe route, you may be missing the wonders of another way of thinking or being.”

“The dragonfly symbolizes going past self-created illusions that limit our growing and changing.”