Thank goodness this is the last day of July. I need a vacation! This has been a demanding month in keeping up with all the coins found. There were over 800 coins retrieved this month which required the writing of their Penny Tales. We have been averaging 25.6 coins/day. Doc calculated that we needed 6 more coins to have an even 25 coins/day as our average. So off we went ….

The day began quietly. There were zero coins at Starbucks! There are two dimes lodged in a crack there which are driving me nuts. They would require a tool to be pried out and no incoming traffic for a few minutes. I guess those are two forgone coins, but I’m not going to count them because we may go back for those in the future….

I stopped at the 99¢ store for a Care Balloon. There were two pennies under the feet of the cashier. While my balloon was being filled, I kept trying to retrieve them, but the gal kept getting in my way! :-0 Finally I just dove in and walked away. Then I found a bright shiny penny in the aisle where I had been standing that whole time! Mushroom coin (Pennies #1-3).

I walked over to the convenience store and asked Doc to drive over and fetch me. I didn’t find any coins, but he and Sparky found a dark one in the gutter on the way to the van! (Coin #4).

Of course Doc needed to stop at McDonalds for his breakfast. There were no coins in the drive through there! Wow! Zero at Starbucks and McDs! But there were 3 dirty coins in the planter. (Coins #5-7)

The first store did not have all the balloons I wanted, so we stopped at another 99¢ store. (And it is a store where I often find coins). There was a penny as I walked in. (Coin #8) Near the helium tank was a counter-top acrylic display stand. In previous visits I had noticed the coins trapped in the base of it. Today while waiting for my balloons to be filled, I tried discretely to move all the key chains, move the rotating metal display, move the random items laying on top, then pick up the display and tilt it so the coins would slide forward. Yes! A penny and a nickel! (Coin #9&10) Then I had to put everything back! Yes, I was doing all this within 3 ft. of the gal who was blowing up the balloons. Penny Fever

Meanwhile Doc was next door at the Liquor store. He found one penny in the aisle. (Coin #11) Then he spotted 2 pennies on the floor behind the counter. He asked the salesperson if he could “have those pennies for my wife who collects them?” The guy was unwilling to give them to Doc, so Doc offered to exchange two pocket pennies for the two Found pennies. Deal! (Coins #12&13).

I wanted to deliver the balloons and go home. But we were passing that 7-11 … quick stop. I usually do not buy anything (which looks very suspicious as if you are casing the joint).

By now I was hungry. I carefully searched the whole store. Chose two bananas and was standing in a line of several people to pay. From 10 ft. away I could see a quarter back under the wire banana rack! (Coin #14). Mushroom coin. Then the cashier needed to help the young boy in front of me, so they moved away from the register for a few moments which allowed me to get down on one knee and find two pennies. (Coins #15&16). Meanwhile Doc was finding Coin #17 in the parking lot “where the concrete meets the asphalt”.

800 coins this month and be the beginning of a new month: 08 That man is demanding!

We were heading down Foothill Blvd. when Doc detoured unexpectedly across the street. That little Munchie Shack in the parking lot was beckoning him. I walked the perimeter three times and was ready to quit. Then I spotted the shiniest penny! (Coin #18) Asphalt Mushroom. I knocked on the window of the shack. There were two young guys there, so I shared the story and a business card. They smiled. Sharing the JOY.

Doc stopped at the bank for cash. I went next door to the grocery store where I retrieved one penny from under the cigarette rack. (Coin #19).

It is now noon as I am writing this. Wanted to get these notes out of the way because I may not remember all of this by Sunday when we return.

How long can it take to travel 50 miles? That depends on how many PennyFinding stops you make. There were three pennies (and a burger) at McDonalds near home. A penny and a nickel at Starbucks in San Bernardino as we headed up the mountain. One penny at the Del Taco (foregone due to traffic at the window). One penny at KFC. Three pennies (and a burger) at McDonalds. A penny at the feet of a toothless man eating his lunch at the gas pump. A penny at the Crestline liquor store. (I had never been in there before and decided to investigate). One penny in the variety store after I had just given up on finding any there. 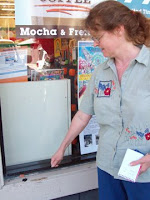 The 7-11 was a great stop. Two pennies outside on the window ledge and propped up against the glass. Another penny in the walkway outside the store. I spotted several coins under the counter and when the traffic cleared I dove for them.


I emerged with a penny, nickel and dime. Just needed a quarter to “hit for the cycle”. 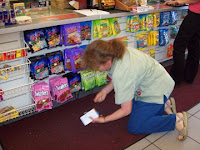 Found another dime under the counter. Doc came in the store and I spotted a Mushroom Coin - a quarter! It was under the counter where I had already been collecting! It was deep, so Doc bought a slurpee and blocked for me while he was paying. The customer in front of us left his penny change for us to claim. Nine coins there.

Later in the day we needed supplies from the hardware store. I didn’t want to leave there without some sort of coin. So a dime manifested by the register just as we were leaving

That makes 810 coins for the month of July.