Doc and I both thought today would be a slow Penny Finding day. On his run to McDonalds this morning he only found one penny. (Coin #1) I found zero coins at the Circle K and fitness center. Since Doc needed to be at work earlier today, there would be no chance for additional hunting before work. I quickly got showered and dressed. Slipped on my shoes to find a penny in one! This shoe had been stored on a shelf 3 ft. of the ground in a closet. It’s not as if a coin could have just fallen into it. (Coin #2) Great. That took care of my coin for today and we were off to work.

On the way to my office I couldn’t resist looking in the study room and around the vending machines. Nothing. Slow Day.

Later in the morning I needed to transport some things over to the other Engineering building. After the delivery, I passed through the lab of our race team who has just headed off to Germany for a competition. (I figured they may have been scrambling to leave and dropped a few coins). There were 4 pennies, 1 nickel, 3 dimes, and 4 quarters! (Coins #3-14)

I looked at a table covered in old magazines and catalogs. There was the tiniest sliver of a penny showing from under one stack of magazines. I tried to lift a corner of the book and found another penny and then a nickel! (Coins #15-17). The lab was a “Coin Mine”.

Just before leaving work for the day, I again passed through the student study room. This time to shut off the lights and find a dime, then a penny hiding behind some trash, and then another penny in the aisle. (Coins #18-20). I also found a laptop with a cupcake beside it, but I was only interested in the coins.

I was ready to head home. However, Doc only had 4000 steps on his pedometer and I only had 6000 so he proposed meandering through the LaVerne Street Market. I told him if the objective was steps, we should go elsewhere. The food, crowds and merchandise are too distracting to engage in serious walking. However, he wanted to walk where he might find coins. 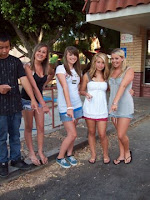 Our first search area was the Circle K. I found nothing inside. As I exited, Doc said, “There is a shiny thing between the four young gals over there. I’m not going to get it!” I replied, “I will!” I asked the young ladies if it would be OK to retrieve the nickel at their feet so I could use it for today’s Penny Tale. They agreed and it made for a fun photo opportunity. (Coin #21)

Doc next found a penny by the produce stalls (Coin #22). Then at the donut shop he said, “I just KNOW there is a coin around here.” It was a quarter and it was super obviously sitting on the sidewalk! (Coin #23). (See photo).

Doc said he wanted an average of 25 coins/day for the month of July. So the next stop was McDonalds. I collected one penny as Doc was placing his order and then 12 more coins from the planter. (A second Coin Mine today - plus after cleaning, one of the coins was a dime.) (Coins #24-36).

So much for a Slow Day!

And there were even Three Hits for the Cycle!

Labels: coin mine, Hit for the Cycle, Pedometer