This morning Doc made his requisite stop at McDonald’s on the way to work. I found a dime and a penny at the pay window. Doc spotted numerous coins in the planter and hopped out of the car to fetch 4 of them. They were so dirt coated that we could not distinguish which denominations they were. When Doc scraped them, he found 3 pennies and a nickel. So Coins #1-6 at that stop. Doc said we definitely needed to find a quarter to hit for the cycle.

When we left school and headed to our biweekly “Play Time” with the kids, Doc detoured off the freeway for the West Covina Starbucks saying, “I am going for the coffee, you go for the silver!” There seems to be a constant stream of vehicles at that store. We collected 2 nickels, 5 dimes and 2 pennies. (Coins #7-15).

As we continued down the freeway, Doc said “we STILL need a quarter”. To which I replied, “Penny Angels, we have plenty of dimes and several nickels, so how about at least TWO quarters while we are out with the kids tonight?” 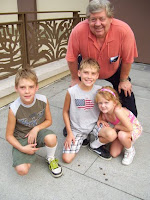 We picked up the kids and headed for a movie theatre in Pasadena. Due to the heat and all the smoke from the fires, a play session in the park was not an option today. We were riding the escalator when Brandon spotted a penny at the very top where the teeth meet the treads. He was excited and very careful as he collected that find. A few minutes later as we were paying for the tickets, Brandon stepped on a Quarter! I had totally forgotten about that verbal request uttered on the freeway. It worked! I was excitedly telling the kids how I had specifically asked the Penny Angels for 1 or 2 quarters today, so we were all dancing a happy jig. Then we spotted another quarter by Brandon’s foot! Mushroom Coin. Then a penny! (Coins #16-19).

We saw the move ‘Ponyo’. Rated G. Lessons like: Politeness, Respect of elders, love, caring. We all really enjoyed it. Some perky music at the end had us all standing and dancing in the aisle.

After the movie (which was made in Japan and showed noodles and chopsticks), the kids wanted noodles for dinner. So we found a Mongolian BBQ with noodles and a penny by the cash register (Coin #20). We had such a wonderful and joyous time together.

We dropped off the kids and read them a bedtime story, then headed home. I had been kind of hoping for 3 quarters for a triple Hit for the Cycle, so right before getting home, Doc detoured and I walked through another McDonalds lane. Silver was found, but it was a dime. (Coin #21).

Twenty-one is a Lucky number and we will end on that note tonight.