Today’s temperatures were expected to reach over 100 degrees, yet our yard was demanding some attention. So, as much as I dread getting up early, we did - and spent two hours cleaning filters, fighting with the thorny berry plants and making a tiny bit of progress out there.

I had planned to spend the morning (while the house was cool) in dealing with paper work and preparing the house for arrival of guests later in the week. However, it was 10 AM and Doc insisted upon a Starbucks run … I agreed to go with him in order to Find Pennies. We added one additional stop, then another, then another … After 2.5 hours and ten stores, we were home with ten coins.

As we headed out from home, Doc wasted no time in finding his first penny. It was at the first intersection (about 2 minutes into our journey) when he said, “Penny in the Median!” I didn’t believe him, but he retrieved it. (Coin #1) I said, “OK. We are done for the day.”

Our first stop was for breakfast (with a ‘temporary’ coffee infusion). No coins there L

Next to Radio Shack to recycle batteries then a walk through Albertson’s to look for coins. Doc spotted a penny by the ATM machine. There was a person with lots of luggage using the machine for a very long time. Lesson: Patience! Finally retrieved that coin, then spotted another one by one of the cash registers. Again had to wait for people to move away. (Coins #2&3)

Our real purpose for stopping at this shopping center was the jeweler. I broke the chain on which I wear Penny Pendant. I’ve known for a while that chain was way too tiny to hold the weight, but it took breaking it in order for me to take action.

Lesson: We often don’t take the precautionary actions we should. Then when things “break” we are forced to reevaluate and fix, quit, or CHANGE our method of operation.

I had tried a half dozen products to make Penny Pendant shiny. Moderate success and each time the shine only lasted a few days. I asked the jeweler for advice … he took the tarnished penny away for a while, held it to the polishing wheel and returned with it gleaming!

Our third stopping point was the recycle center to turn in cans and bottles. I spotted Penny #4 before Doc had even parked the car. Then while he counted out bottles, I walked the parking lot.

Saw a spot in front of the pizza place, but didn’t think it was a penny. Investigated anyhow and collected Penny #5.

The SingSong Thursday was effective, so I did one today:

How about guiding my steps today?

Found Penny #6 within a minute.

We went inside the grocery store to redeem the recycle voucher. (The money is being saved in a jar to donate later). Doc found Penny #6 by the toys. Just what was he doing there??? 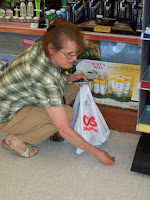 Tina: “I did not find any coins, what about you?”

Doc: “I walked up and down the aisles here and did not spot any. No coins here.”

Tina: “Will the nickel next to you count if we pick that one up?” (See photo)

I was recording that Find when I added: “Why don’t you retrieve the dime there as well!”

I was teasing Doc about the quality of his searching.

He laughed saying, “I was looking along edges and under counters and shelves - not right in the middle of the darn aisle!”

We finally made it to Starbucks! I was hoping for a quarter to complete a “hit for the cycle”, but only found a penny (Coin #9). Coin #10 (a penny) at the gas station convenience store.

Reflections: Newspaper Columnists don’t write EVERY day. And when they go on vacation, their columns can be printed a second time. The Penny Angels don’t grant vacation time or time off for good behavior. They expect daily interaction. I guess that is what we learn from any spiritual set of beliefs. Our connection with a higher Source is not something just to be done for a few hours each Sunday morning. Every hour of every day we need to strive to be “in the flow”, living by our values, making progress toward improving ourselves, trying to live as shining examples, and assisting as many other people as we can.