Today we hit 2,006 Smiles on the Penny Smiles counter! Yipee! 13 people visited the PennyFinders website for the first time. We just need to do that 499 more times and we will have reached the 1,000,000 mark.

Yesterday in my class we were talking about dreams, ideas, goals, inventions and making things a reality. To achieve a goal, there must be a time limit. How long do you think it will take this team to acquire 1,000,000 Penny Smiles? A month? A year? 5 years?

One of the first tasks at work today was to put away the equipment borrowed for last night’s function. I found a penny, then a dime and second penny when putting away the cart and things. (Coins #1-3)

For those of you new to the 2010 PennyFinding team:

Doc and I have “Play Time” every other week with my two 8-year-old twin nephews and 5-year-old niece. That is a tradition which began just after the boys were adopted and my brother was called to serve for a year in Iraq. We grew very attached to the kids during that year and have not been willing to give up our play dates.

Today for Play Time we just did a bunch of little things. We don’t need to do spectacular things. The joy is in just “hanging” together. “Memorizing spelling words for a test” is a chore. Making up silly sentences with special words and finding those words on signs that we read is a GAME!

The first stop was the car wash. Uncle Doc got a coffee, each kid got one quarter for either a game or gum ball, and Tina got a penny. (Coin #4) We then headed to the mall. Doc suddenly pulled into a parking lot. He hopped out, checked the newspaper rack, ran inside the store, and emerged with a penny. (Coin #5). The boys and I were practicing spelling words. We had almost reached the mall and were stopped at a red light when Uncle Doc shouted “Penny in the median!” (Coin #6). 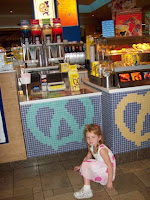 When we reached the mall we still had 15 minutes before Jump ‘n Jam opened for the 5 PM session. Found a penny (Coin #7) just inside the mall. We all shared a tray of Sweet Pretzel bits and Ashley found a penny as we were placing our order. (Coin #8) 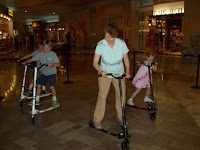 Then we rode the 60 Degree scooters. The kids went zooming around. I crawled, Doc took photos.

Nick wanted time with Doc, so those two went “investigating” inside the mall while Brandon, Ashley and I went to Jump ‘n Jam. They played, I sat down. All of a sudden my world was shattered by a piercing shriek and hurtling object! My heartrate went sky high and I had no idea where I was for the briefest moment. Guess I had fallen asleep and little Ashley decided I was not permitted to be merely an observer. I was there to play! So off we crawled on hands and knees through the maze of tunnels and slides and nets and tubes. The openings in the play structure are meant for little people, not “mature” bodies. 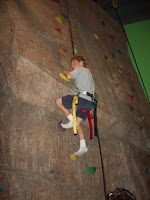 Brandon took on the challenge of the rock wall. He did 4 climbs and got faster on each one.

Doc and Nick tested the carousel and analyzed the mechanical systems on it. Nick found his penny by the bike rack. (Coin #9)

At 6 PM when the play center closed, we headed down the freeway for dinner and to feed the GrandFISH. We were also finishing off our reading books and practicing more spelling words. Since one of the words was “Shish Kebob” this week and the boys really like tabouli, we stopped at a little Mediterranean café. The owner made us feel very welcome and the food was great. We all like the whipped garlic. While the food was being prepared, Brandon and I went next door to the 7-11 and collected HIS penny (Coin #10). Plus, we shared the story with the security guard and gave him a penny card. Now each kid had found a coin.

We were supposed to have the kids home by 8 PM, but were just feeding the GrandFISH at the time. We quickly defrosted the shrimp and prepared a “fast food” meal for both fish tanks, then headed home.

Just before we got on the freeway, Uncle Doc spotted a Median Find. (He is sure good at those - even at night). He collected that penny, (Coin #11) moved the van a few feet forward, and spotted another coin! But the light was turning green and we had to move. Foregone coin.

Thought: We each have “homework to do” and “lessons to study” every day. Do we consider them “chores”, “necessary evils” or a fun opportunity to learn and grow?