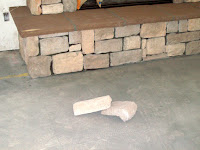 We sure maximized that fireplace stone. There were only two of the corner stones remaining. No waste on those! (I wish it was a case of ‘no waist’ like 30 years ago when Doc married me, but alas, that is no longer the case).

This morning Doc said he graded papers and did class prep until noon. (Sure he did. I’ll bet as soon as I left the house, he and the dogs probably spent time with coffee and TV).

There were a series of early morning calls, then it was out the door. First stop was to order ¼ round tile for the Aussie bathroom. It is in stock. “We will have it Tuesday for you”. But then a few hours later I received a call - 4 months for that. Back to the drawing board.

Next stop was to say “thank you” to Barak for putting my hand-sketched medallion design into PhotoShop. And he even made a few more edits for me! When I “taped it out” on the floor of the Penny Palace, I realized I may need to ‘stretch’ it a little bigger.

Two additional stops to pick up shower tile, and then to place the order for all the door and window moldings. 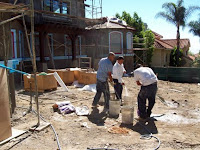 At the jobsite, the stucco crew was attaching more foam, reinforcing it, and stuccoing the first coat on it. At 3:30 Daryl and I interviewed a potential wood flooring installer. Anxious to see what he says. It probably didn’t help the cost estimate when he realized there are no stairs for him to carry the wood up to the second level. That means ladder work.

On the way home I stopped at Lowe’s for painting supplies. I think we may have found a great paint for that mountain wall. Regular paints just don’t have ‘depth’ to them!

Of course, I needed to find a penny. So I stopped at a 7-11 where I collected 3 pennies and a dime from under the counter. Good thing there were no other customers waiting in line, because this was a nose-to-the-floor retrieval!

If doc "spent time with coffee" he would have found a coin, probably silver.

Were you even a student yet 30 years ago?