While Doc went off to school, Handyman George and I moved a few things  J.  Doc was very surprised when he found out this evening. 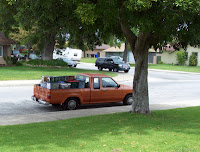 The move was actually supposed to take place at noon yesterday, but it rained!  (Thus I had the stay-at-home day).  Today Doc was just not cooperating. He was taking forever to leave the house and George was parked around the corner with his truck, trailer, and two other guys just waiting to get started.

Over the past week I have been quietly pulling boxes together and rearranging things in order to make today’s move as effective as possible.  We hauled two loads in George’s trailer and two loads in Pippy.  The guys worked until 6 p.m. before they went home.

***************
Stucco Tommy called unexpectedly in the early afternoon.  Uncle and Ottie (Stucco Angels) were on the jobsite wanting to get access!  They came to repair the scratch in the new patio stucco wall.

I noticed the water in the stream looked clearer today.  Turns out a Landscaping Angel had visited to put granule additives in the water and leave me a bottle for future use.

Stopped at a Target store for cleaning supplies and some little solar lights.  I told the Angels they had better deliver at that stop because I was not going anywhere else!  I found two pennies.  Cashier Jeff was the witness and I gave him a Penny Card plus a 60 second story as I was paying for the items.  Shared Joy.

Sneaky. I was moving furniture, so I missed Doc when he stopped by between classes.

The palace glows warmly at night. Are the exterior 'vertical' fixtures beside the garage door supposed to be on?