Another day of being at the Penny Palace at 7 a.m.  We were expecting the Gas Company installer any time between 7 - noon.

Iron Jimmy and Jonathan arrived to install the remainder of the driveway fencing.  Gosh it looks great!  We also reviewed the designs for the next project - the dog yard fencing.  As I was making payment I asked Jimmy for the invoice on that Wagon Wheel Axle.  Doc just loves spinning his wheel!  Jimmy said it was his gift to the Penny Palace.  The team working on this project is awesome.  We are very blessed.

Window Brian continued window cleaning.  Using his 28 ft. ladder he also agreed to clean the ceiling fans, wipe down the fireplace stone, and clean the trusses.  We were told we would need to get a lift in the Grand Room to switch out the light bulbs when they needed changing in the future.  So today we had Brian put in LEDs which are supposed to last 15 years.  One of the eight recessed lights kept tripping the circuit breaker, so an urgent call was made to the electrician.   New issue to resolve.  I will meet him tomorrow at 7:30 a.m.

The Gas Company rep checked all the gas features in the house for good connections. Then he installed the gas meter.  We Now Have Gas!  (and thus hot water).

This morning our good friends Don and Jeanne visited.  Don was Best Man at our wedding and Jeanne took our wedding photos (30 years ago).  They have since moved to Sacramento so we were delighted to see them again. 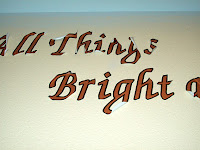 The vinyl lettering which looked so great when I installed it last week, has started to curl and some of the letters are nearly falling off.  Another issue to resolve.

This afternoon. HVAC Steve connected the two gas furnaces.  Yipee!  We have heating.

Doc and I shut down the Penny Palace at 4 p.m.  We stopped at the key and lock kiosk to get one wayward lock keyed to match all the others.  The locksmith said he could not do it.  Another new issue to resolve.

Our next stop was the storage unit to prove to Doc that I emptied it yesterday (and to close out our account). Yipee!

We have a chandelier with candelabra-base bulbs. After 20 years, half had burned out. I switched them all out for compact fluorescents. One year later, half of them are burned out.