Doc headed out to son Brian’s house early today.  They drafted designs for a work area underneath Brian’s house.

As soon as Doc was out the door, I switched into high gear.  I had allotted one hour to work on the garage before it got too hot out there.  I was making great progress and actually spent nearly two hours out there.

Next I worked on some concepts for the Open House Invitations.  Trying to figure out how to cater to the 5-6 very different audiences.  I created an outline for the Open House Walking Tour program.  It is likely to be 20 pages or more!  There is so much to tell about the house and various components.

Around noon I began work on the FAMILY Room (Doc’s TV Room).  I moved bookcases, washed, polished, unpacked, arranged and more.  After two hours I was making tremendous progress and called son Brian to see if he could continue Babysitting Doc for a few more hours.  I wanted to finish the job and surprise Doc when he arrived home.

Doc arrived home totally exhausted around 5 p.m.  He had stopped at McDonalds for a quick snack and a quarter.  (Doc #1)  He walked in the house, turned on the TV, and pretty much checked out for the rest of the day.  He didn’t really notice anything of what I had done in his room and garage.  I was disappointed.

With the TV on, I could no longer work effectively in that room or on creative projects like the Open House printed materials.  Plus, I needed a coin for the day.  So I showered, changed, and left the house around 6 p.m.  I asked for any Designer Angels to come along. 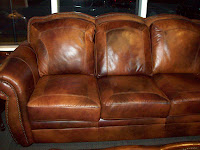 I went to a craft / design center which had been recently recommended to me.  Huge store.  Got some ideas for the Grand Room lighting and for the Open House decorations.  When that store closed at 7 p.m. I went across the street to just browse through an interesting looking furniture store.  I wandered through the entire store and was just about to leave when I spotted it - a sofa for the Grand Room!  I sat on it, laid on it, pulled it away from the wall, and played with the cushions.   Thanks Angels.  I think I found the perfect sofa!

It was now 8:30 p.m. and I didn’t have a coin for the day.  I stopped at a 24 Hr WalMart for a few items (and to look for coins).  Surely there would be coins in such a busy store.  No coins as I went in and looked down each of the check out lanes.  None in the coffee station, McDonalds area, or pharmacy either.  Yikes.  I went about my shopping.  Tried on a shirt in the dressing area and found a penny there.  Actually it was near the foot of the attendant, so I traded her a Penny Card for the found penny.  (Coin #1)

The penny turned out to be a Canadian one.  I said, “Penny Angels, I’m not sure if I should count that one or not?”  Within moments there was a brilliant new penny in my path.  Then a second very worn looking penny a few feet further.  (Coin #2&3)

I could have the sofa delivered in two days!!  Wahoo!  One small (actually large) problem.  There are dozens of boxes and items in that huge pile on the Grand Room floor which has now been there for two months.  It is essentially all STUFF I haven’t wanted to deal with.  Don’t want to get rid of it, but also don’t know what to do with it.  It could continue staying there until it rots, however, I can't order that sofa until I can "mock up" the furniture placement of the room.  Thus, tomorrow that pile will be Conquered!!!

Thought:  It just takes proper motivation to go from "impossible" to "done"!

At 9:30 I stopped for a quick meal.  Doc and I had noticed Wahoo Fish Tacos when we visited Home Depot recently.  Doc does not like fish, so I used this alone time to try a new place.  The food was quite good and I found one penny, two dimes, and a quarter there!  (Coins 4-7)