I began writing today’s Penny Tale and had this story as part of the bigger incredible day. However, it is just a nice little “stand alone” story.

**************
Today when I left the drapery store at 3 p.m. I looked at the perfectly clear skies, felt the 100+ temperature and said, “Penny Angels - Graphic Designer Chaz has requested a really good photo of the Penny Palace for the Open House invitations. The photo needs to be taken in the afternoon to get light on the front of the house.  The lighting needs to be ‘just right’. Yesterday the trees created such harsh shadows.  Chaz said those photos were not good enough. What we really need is adequate light, but with cloud cover!  Angels - PLEASE provide that”.

(Keep in mind we live in Southern California where afternoon clouds do not just Magically appear).

As I was driving home Doc called.  That was not expected, so I pulled off to return his call.  The electricians were at the Penny Palace to finish off their work! (I have been asking them to come out for three months now).

When I got home at 4 p.m., I needed to work with the electricians instead of taking those house photos.  I did sneak to the front yard and take one or two photos, but the shadows were too harsh -- just like yesterday.  However, a few clouds were beginning to form!  Finally at 5 p.m. the electricians left and I grabbed my camera … For the next 45 minutes the skies became more overcast and the clouds more and more uniform as I took photos.

At 6:30 p.m. I sent five of the photos off to Chaz not knowing what to expect.  His response just arrived.  Hopefully this will make you GRIN as it did me….

K – E – Y   Why? Because it looks like it’s a Disney feature in Technicolor.

These are incredibly beautiful photos….. these really had Penny Angels rigging the lights.

The Penny Palace Open House invitations will be sent to the printer in the next day or two.  Hold the dates …. October 13th and 14th 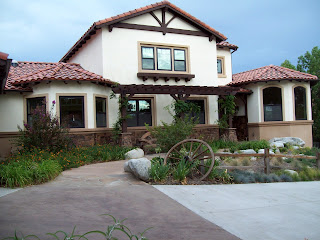