Needed to mail a letter this morning so headed for the post office -with a detour through KFC, Taco Bell and Arby’s to look for coins. None to be found. The window at McDonald’s is usually packed in the morning, but today it was wide open! I quickly ran through there and collected two pennies and a nickel. (Coins #1-3) 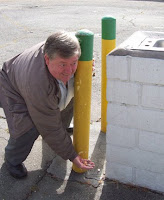 Doc could not stay in the van. He ventured next door to the self-serve car wash.

Doc was showing me a penny that he found. There was a gentleman washing his car and our Penny Fever made him smile. So we gave him a Penny Card and noticed a penny beside us. And then another and another. The guy drove away and we found a dime! The reward of sharing JOY. Eight coins there. (Coins #4-11). 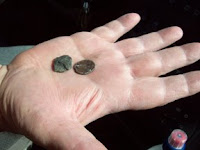 Doc wanted to find a quarter so he pulled into CVS. Only one penny to be found in the parking lot (Coin #12).

When we exited the freeway at the top of the offramp Doc spotted a penny. The light was already a stale red, so I was questioning his intelligence in diving out of the van. Doc rescued the penny(Coin #13) and grabbed again for what he thought was another penny. It was a lead piece!

Reminder: Do as you are LED to!

Another thought: Don’t be afraid to LEAD and then show others how to do whatever you are being LEAD to LEAD! Gosh the English language is confusing!

And the red light was probably an L.E.D.!

At school I needed to delver a memo to an office within the Marketplace. I saw my colleague JR (an expert Penny Finder) emerging from the building. My thoughts, “Rats! There won’t be any coins for me to find!” Wrong! There was a dime as I walked in. Also a penny at the salad bar. (Coins #14 & 15)

After class tonight Doc found a penny on the way back to his office. (Coin #16).