Anxious for today to be over with and a new day to begin. So what do you want to read about today? The Good Stuff, or the Not So Good Stuff? I have plenty of items in each of those categories. 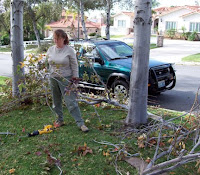 — Arrived at the jobsite to see we had only lost a few tree branches out front. Other houses had trees pulled out - with root balls attached!

— One of the electricians installed all the interior electrical outlets

— The two tile guys finished gluing and screwing the backerboard

— The grading guy moved the entire pile of rocks out of the south end of the property in preparation for the Landscaping Crew to stake the various features.

— The grading guy leveled out the entire dirt pile to bring the back yard closer to the needed elevations.

— The room screen which I ordered on-line arrived today. I am hoping we can take the pieces apart and use as café doors

— I spent 30 minutes searching for a lost electronic file and was getting very perturbed and grumpy. Doc said to kiss him for good luck. A few minutes later I found the missing file!

— I was trying to get out the door this morning in a timely manner. I stopped to help Doc move the heavy dining table. We overturned a vase of flowers and water spilled all over my papers, folders, documents, etc. Plus the water ran between the tabletop glass and wood surface, so we had to remove the glass

— Arrived at the jobsite to find the front door as well as two other doors blown out. 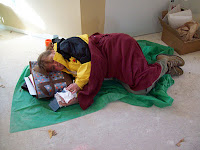 — Debris and leaves throughout the Penny Palace - and I had just swept all the rooms last week.

— When emerging from the Dungeon, I had my hands full of tools and tripped on some of the vines along the side wall. I went down hard. The just-filled dirt was soft, but all those D*** rocks were not! I was eating dirt and kissing rocks. Luckily I had two ice packs in my lunchbox.

— My mom called to say her roof supports for her patio (mobile home) have pulled off the ground and her roof is likely to blow off if action is not taken immediately. Can I help?

— The painter took off a week for the holidays. I have been expecting him since Tuesday. He was supposed to paint the doors so the finish guys could install the locks so that we can lock up the house against winds and vandals. He landed a much larger job and they wanted him to begin immediately, so he would finish our job when he could find time.

— I went to Home Depot to try and get the four locks which were missing from our recent Dixieline lock order. They did not have the combo sets and the individual components were significantly higher in price.

I left the Penny Palace around 4:45 today as it was getting dark. Since we have no front door to protect the house, I asked the Penny Angels to look over it tonight.

On the way home I stopped at Home Depot for door locks. No pennies found there. So I stopped at the grocery store for some fruit - and one penny.