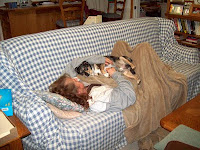 Last night I let Dundee out for Bedtime Peepee. When he came back inside, he wanted to snuggle. So I cuddled with him for a few minutes. Guess I was tired. Doc found Dundee and I asleep on the sofa this morning.

This morning Doc and I ran a few errands to the bank, post office, etc. As we were driving, Doc recalled that he might have seen a penny the other day in a major intersection, but he was driving alone and he could not pursue it. So, of course, we headed to that intersection. As we slowly approached, I spotted a very dark penny. I dove for the coin while Doc checked for approaching traffic. I told him there was no way he could have spotted such a dark coin so far down in a crack. He said, “No, it’s that other one over there!” So once again I dove out of the van. Got it! But then we spotted a third penny. No way! There still were no cars coming, so I dove out a third time! (Coins #1-3) The Angels were playing with us this morning.

Our next stop was to drop off a sample of the wood floor at the home of the Simple Floors sales rep. I had ordered samples on-line and he called to follow up. None of the samples looked good with our Oak planks, so Joe suggested I send him a sample of our wood. I was not about to go to the post office this time of year. Turns out that Joe lives only 2 miles from us, so I took him the sample. Let’s hope he can find something.

Yesterday when painting the bathroom ceiling I was super frustrated that there was no shelf on the ladder on which to set the paint tray. How could I be ragging the paint with two hands plus holding a brush, paint tray, paper towels, wash rag, etc.? So today we stopped at Lowe’s for supplies and a ladder tray. Did not find any. So Doc suggested I just buy a whole ladder instead. That was a good idea. Our current 8 ft. ladder is so heavy, I can’t really lift it and thus must drag it across the room. This new ladder is super light weight and the maximum load rating on it means it is MINE not Doc’s! LOL

At Lowe’s we ran into one of our former solar race car students. His son is now almost graduating from Cal Poly Pomona! Can we be that old? Then a co-worker from Cal Poly recognized us and began a conversation. She talked about how little things can bring smiles and that too many people say they will be happy “someday when ...” So I gave her a Penny Card and told her about Penny Finding. Shared JOY.

Doc found one penny in the parking lot. (Coin #4)

At the jobsite we glued another piece of the garage ladder trim.

We finally painted the stars on the Aussie Room ceiling. Even with the scaffolding, that job was much tougher than I expected. Wondering how those stars will look once we remove the templates.

We shut down the jobsite shortly before 5 p.m. and headed for the Fish & Chip shop. Arrived just as they were locking the doors. Plan B was to head for Mexican food - where we found one penny. (Coin #5).

Tonight there are Starry Skies both inside and outside the new house.

Cute picture of you and Dundee. He's lucky to have such a great nurse! Hope he gets better soon!