Doc headed to the jobsite at 7:30 a.m. I headed to the vet at 9 a.m. Dundee had his 2-week check up for his torn leg ligament. The vet said she didn’t see much improvement. Not the news I wanted to hear. Do we continue another two weeks and hope for improvement or opt for surgery?

My wristwatch stopped during the night, so on the way to the jobsite, I obtained a replacement battery and one penny. (Coin #1)

At the jobsite Tile Fidencio and Painter Pete were working. Grading crew began working, but the winds and dust were too strong, so the crew left. The expected plywood flooring guy did not show. 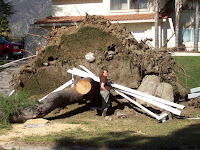 Doc and I glued on more pieces of trim around the garage ladder opening.

I tried to create a gradient blue sky effect in the garden bathroom. The idea was to have every morning start out sunny and cheerful. The paint job took hours, made a terrible mess, and does not look like what I wanted. I guess I can always paint over it. L

Mid afternoon Doc went out for coffee. He returned with the coffee, lunch (two hot dogs) and a penny from 7-11. (Coin #2) 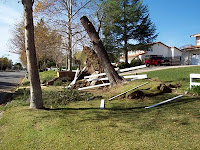 The roofer has just FAXed his invoice to me. I guess if his tile job survived these recent windstorms, he deserves payment. What a tough initial test for the new roof!

Attached are examples of the many trees which did not survive the winds.