The anticipated “verdict” from the bank was not handed down L. Still no word about our offer on the Deer Creek land. The realtor says “no worries”. Ours was the best offer submitted and she is confident that it will be accepted. The asset manager has been on vacation and is swamped with the incoming paperwork.

Doc seems to be a little anxious - kinda like an expecting father who is pacing the aisles of the hospital waiting room. I am pretty mellow and wanting to clear out some of the piles and tasks around our current house because I know that soon my energy will be very focused elsewhere.

Today there were a number of coins found. After my morning work out I did search the lot and Circle K but nothing there. So I stopped at a 7-11 on the way home. Spotted a dime under the counter as I walked in. The solo cashier was stocking shelves. Great. Easy retrieval while she was distracted. No other customers and a distracted cashier … let me just see what else might be under there. There was a penny, and a dime and two pennies … and then the cashier asked if I needed something. “I was just trying to retrieve a penny.” Her reply, “Just leave it there. Don’t bother with it.” But I had spotted something silver down there partially under a cable. One more quick dive for a quarter. I felt awkward, so I bought a banana and quickly left with the coins. (Coins #1-6).

As he walked to the grocery store he had not found any coins so he made up a Singsong! I could not believe it when he shared that with me. “Penny Angels, Penny Angels, what do you say? Are you going to give me some coins today?” He immediately found a penny! He said, “I was getting greedy so I did another Singsong: Penny Angels, Penny Angels, what do you say? How about a little silver today?” He did not see any coins immediately. However, a few minutes later, there was a dime on the ledge at Starbucks. (Coins #7&8). Doc’s belief of verbalizing and manifesting just took a big leap today.

At work I was presented with four indirect coins. Co-workers P.D. and L.P. are participating in the Walk Across America challenge so they have been walking. They gifted a dime (from today’s walk) plus one Canadian and two American pennies from previous walks. Encouragement for that new house.

While driving home tonight Doc observed that we each had less than 5,000 steps. 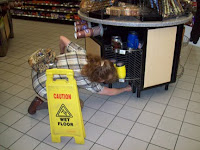 He proposed stopping at the Street Fair to walk. We began at the Circle K where we found one penny under the bread display (see photo) and a dime by the lottery scanner (after we moved a rolling display rack). (Coins #9&10)

I spotted a quarter at a vendor booth and tried my best to swoop down inconspicuously to get it. (Coin #11).

Doc was moving too slowly, so I suggested parting ways. He headed toward the donut shop. I headed out to the university parking lots. I was passing one booth when I spotted a penny under the chair of a young man who was relaxing there. I kept walking and was going to let that penny go. Couldn’t do it. Turned around and approached the lad. His name was Shafi. 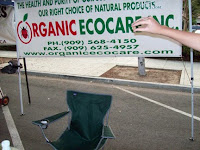 I explained that I write daily Penny Tales and would like the penny from under his ^*^* (chair) ;-) He handed it to me with a smile. I asked if he would like to be photographed with today’s Penny Find. (See photo of his hand). He then said, “I knew I dropped it and it was there. I was too lazy to pick it up. I actually thought that I would leave it there because it might be found by someone who could use it for a good purpose”. (Coin #12)

Lesson: The power of verbalizing your requests.