All this week I have been saying “I feel like a dog with a dozen inviting fire hydrants in front of me! Not sure where to start. The choices are overwhelming. So many great opportunities and not enough in me to take full advantage of these wonderful things. Too excited to waste time eating or sleeping.

It was the usual start for the day -- Starbucks for Doc’s coffee and Tina’s coins. One penny in the dirt planter while placing the order. A very obvious quarter under the pick up window, then a penny and a dime close by. Doc said to fetch the other dime as well. I asked him “What dime?” He pointed. I still did not see it even though I was only 2-3 ft. from it. He got out of the van and then showed me again. (Coins #1-5)

Lesson: Sometimes you need others to give clarity to a situation. You may be blinded or unaware of so many opportunities. They may not even be difficult or out of reach at all - you may just be clueless that they exist right next to you! One simple word, gesture, or bit of advice from someone may be just what you need.

Then YOU can be that signal / beacon / little voice for someone else! 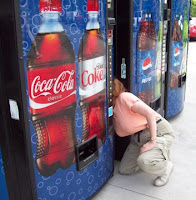 Our next stop was Walmart for supplies and a new battery for the van. We found one penny by the payphones outside. We also spotted a gorgeous shiny penny - but out of reach deep behind the Coke vending machine by the front entrance. L After getting the car serviced, we used that backscratcher we now keep under the front seat of the car. Perfect tool to get the shiny penny. (See photo). It was one of the new Lincoln Cabin pennies. Very pretty. There was also another penny back there, but out of reach (Foregone coin). (Coins #6-8). 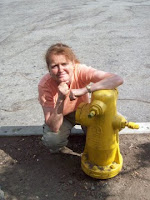 There were some picnic tables at the edge of the parking lot which are obviously used by the smoking employees. There just had to be coins in all that litter… I looked 3 times around the tables. Nothing! Then I looked by the fire hydrant. Remember the thoughts thi s week? Sure enough, there was 2¢ worth at the hydrant! (Coins #9&10) (See photo).

At Home Depot I checked the lines up and back when we first walked in. When checking out, there was a bright penny in the line we chose. The I noticed a second one a few feet away. These were two new Lincoln Studying pennies. First ones I have seen of those. As I was paying, Doc was finding a very grungy penny by the exit door. (Coins #11-13).

We headed home to work on lunch and house plans.

Thirteen coins is plenty to write about for one day. But we needed to take Dundee for his rabies shot and thus went out once again making ourselves vulnerable to the whims of the Penny Angels.

Circle K: We walked the whole parking lot, then inside. I did an additional lap around the lot before going to the van. Doc says “You missed this penny!” (Coin #14).

Petco: After Dundee got his shot and we were leaving, Doc found a penny by the front windows next to a display rack. (Coin #15).

Trader Joes: We were getting salads when Doc abruptly walked away toward the flower bouquets. He came back with a big smile, outstretched hand and a “gift” for me -- a bright shiny beautiful penny. (Coin #16) J Remember - it’s the thought that counts - not the dollar value. We were soooo laughing. After 28 years, the romance is still there!

We were parked in really big shopping center with lots of traffic. As we were driving out of the lot onto the main street and heading home, Doc said: “That could have been a penny we just drove over.” My response. “No Dear! Too dangerous and rude to hold up the cars behind us.” He pulled out into the street (opposite of the direction of home) and looped back into the lot! This time he did not spot the coin - but I looked out my window to see a silver thing. Not certain it was a coin, but 80% likely. I hopped out and grabbed it. Pulled a calf muscle in doing so. Gosh that hurt! But it was a nickel! (Coin #17) Hit for the Cycle! Yippee!