The anticipated “verdict” from the bank was not handed down L. Still no word about our offer. Yes, that sentence is the same one from yesterday.

At 4:10 PM Doc said: “No word from the realtor today. That means no CHANGE.” At that moment the phone rang. The realtor said ours is the only offer at the bank right now and that the property is 99.9% ours, but we do not have the official paperwork. There is nothing to review or investigate, it’s just that the Bank Agent is backlogged. Maybe Monday or Tuesday.

Today was a whirlwind day. You would be laughing if you were a fly on the wall watching this. This is another one of those days which people would say is a fiction story versus a documentary. But it’s all true! Just like the other 237 days.

Doc and I had a meeting scheduled for 10 a.m. Even after stopping at Starbucks we were 30 minutes early. (In Los Angeles you must account for traffic delays). So we walked in order to get in more steps toward the Walk Across America Challenge. I found one penny at the Jack in the Box drive through. (Penny #1). 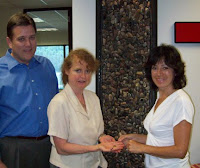 As we were leaving our meeting I passed by a lady working at her desk. I was “Nudged” to turn back and meet her. We shook hands, exchanged names and I said “Just remember me as ‘The Penny Lady’” and gave her a PennyFinders card. As with so many people, she smiled and we shared the story. Then she surprised us. She had a golden (not copper) colored 1996 penny which she received one day from an unknown source. She had been keeping it for a few years for “some special purpose”. After

hearing about Penny Tales, she presented the penny to me! (See 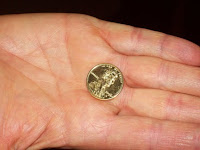 photo). That was a special treasure. I told her how each of my penny finds is carefully logged in and some day this penny might be famous!

As we were stopped to enter the freeway, Doc did one of his incredible Median Find Retrievals. This time the light turned green before he got back in the car. We missed the signal and I’m sure the persons behind us were not too thrilled (Coin #2)

By now it was mid afternoon and Doc was starving, so made the emergency McDonalds run. We emerged with his two McDoubles, one soda one nickel, and two pennies which were pried out of two different concrete expansion cracks. (Coins #3-5). We needed gasoline, so a quick stop at the local Shell station where I claimed one dime and one penny in a one-knee retrieval under the counter. (Coins #6&7) Then there were 5 dirty pennies in the vacuum hose area. (Coins #8-12).

At this point I drafted today’s Penny Tale to you because I expected that tonight might be an all-nighter as I scramble to catch up with today’s list of tasks.

Doc and I had several other plans for this evening, but we were given a Homework assignment to go see the movie “Julie and Julia” before our Monday development meeting. It was great - Perfect Match! There were dozens and dozens of similarities with Julie’s blogging and Penny Tales. Everything from the “Whys?” to the meltdowns to the non-supportive family, to the “perfect husband” to the Pendant she was always wearing, to the sleepless nights, to the JOY in sharing the experience with friends and strangers alike. There were maybe 40 people in the theatre (on a Friday night) and I was the youngest one there!

OK. Back to the Penny Finding … As Doc was paying for the tickets, I said: “Excuse me while I get a few steps in. Plus we still need a quarter to ‘Hit for the Cycle’ Today”. I walked away and began saying out loud: “Penny Angels, if this Manifesting stuff really works, right now would be a good time to prove it. The readers would enjoy hearing that tonight”. I then said:” Penny Angels, Penny Angels, what do you say? We still need to find a quarter today.” Within 30 seconds I spotted a shiny thing in my path. I said laughingly: “Is it really a quarter, or maybe a nickel, or maybe an electronic coin?” It WAS a quarter!!!!!!! I skipped merrily back to the ticket purchase line where I excitedly told the story to Doc while simultaneously recording it for today’s notes and meanwhile doing it loudly enough for a dozen people to overhear me! Some of them smiled, so I shared the story and passed out a few PennyFinders cards.

On the way home, Doc had to stop for some ice cream. I told him: “DO NOT look for any coins - please!” “I already have enough to write tonight.” I went to next door to the bank for some cash. Returned and spotted Doc in the Check Out line. He gave me the eye signals: “No coins”. I signaled back “Good job!” and then I found a penny, and then another penny, and then Doc grabbed 2 dimes and three pennies in the 15-20 ft. between the register and the exit door. That makes 25 cents, my favorite number! (Coins #14-20). So much for the “No Coins Rule!” The Angels just don’t cooperate all the time.

When we arrived home, Doc noticed how backlogged I am with cataloging the past 10 days of pennies. (That is a polite way to say the penny piles are getting out of control). He offered to help! I was so shocked and excited. ;-) In my haste, I spilled half a bottle of white correction fluid in my lap - on my favorite pants. You would be laughing so hard if you could have witnessed it. This Penny Finders stuff is getting costly! Last week Doc "had to get a new computer" because the Blogspot software for writing these Penny Tales is not very cooperative with my Mac.

Back to talking about Doc. This conservative, engineering couch potato husband is now making up Singsongs, talking out loud to Angels, challenging me to walk as many steps as he does each day, editing the Daily Tales, handling the photos, and now offering to do more!?!!? Talk about an incredible partner! Who would have thought? So many CHANGES.

Lesson today: With Faith and Trust, incredible CHANGES are possible.