Doc helped me transport all those shelving pieces I bought last night and a bunch of other stuff to the Penny Palace before he headed off to teach his classes today.

I met David and his new assistant, James at the PP at 9 a.m.  One of their projects was to get pegboard up on the wall of the garage.  When they began, I told James I was anxious to get my pipe wrenches, hammers and screw drivers hanging up there where I could easily get to them when I am working.  While those two were focused on some other projects, I hung my tools.  As they were packing their gear, James somewhat surprisingly said, “She wasn’t kidding!  She really does have tools, and she’s already got them up!”

This morning one of the solar guys, Josh, came to investigate the tiles his crew broke while doing the installation.  More items to ‘resolve’.

After everyone else left at 1 p.m. I did some cleaning and unloading of the 6 boxes of kitchen gear we took over this morning.  Then I tried to assemble the new shelving units, but the shelves were too heavy for me to steady and lift simultaneously.  So instead, I worked in the kitchen pantry area and did more cleaning. 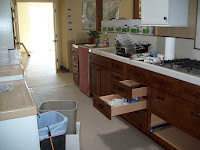 On the way home I made a quick stop at Target for a coins and one or two little items (new scrub brushes and things for the PP).  I walked through the check out area and did not see any coins.  So I did a SingSong for the Angels.  “Hey Penny Angels won’t you come out to play?”  Instantly I spotted two items. I did not think they were coins because they were so brilliantly colored!  I had to look closer. Sure enough - 2 pennies side-by-side. They were 2012 new coins and almost glowing!  One was face up, the other face down.  A shining pair. 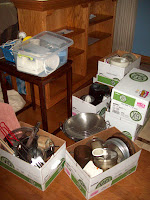 When I was in the shampoo aisle, I spotted a blob. A lady walked right over it so it couldn’t be a coin because surely she would have picked it up.  It was a quarter. Nice.

This evening one word says it all … “Packing!”