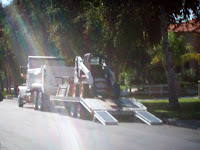 The same four crews were working at the Penny Palace today. The roofers were laying tile (until they ran out), the painters were painting the second coat on doors and jambs. the tile guys were brown coating the Master bath areas and the stone mason was applying the last of the veneer on the house. A Bobcat was brought on site for earth moving next week.

I did some clean up and errands. Spent an hour scrubbing the 8 hose bibs around the house. Chiseled off the stucco and crud. Swept the street in front of the house. After the recent rains, much debris had collected around our wood curb ramps. It was getting unsightly for the neighbors.

This morning two police cars pulled up in front of the Penny Palace right where I had just cleaned the street. The alarm at the house next to ours had been triggered. Just ONE window had been left slightly ajar.

At Noon I headed out for a few errands. I refilled the water jugs for the workers, then stopped at a flooring store to look for additional wood planks. I was told it is difficult now to find solid wood - everything is veneer. My tile order was ready for pick up at 2 p.m. As we loaded boxes in my truck, ONE was missing. That will need to be re-ordered and delivered later this week.

When I arrived back at the jobsite, only the roofing crew remained. Had I arrived ONE minute later, they too would have been gone and there would have been no one to help in moving all those tile boxes out of my truck.

At 4 p.m. I locked up the Penny Palace and headed to Lowe’s. Tried once again to get the “sandy” paint to match the color swatch I had selected. Tomorrow I will test formula #4 to see how it looks.

As I was heading home, I remembered that Pippy needs a smog check to get registered this year. I passed by the Smog Check station (assuming they were closed) to see what time they open in the morning. Aram was still there working and offered to test Pippy as soon as he was through with another customer. He did notice that the truck had been red, but now was copper colored. He asked about that. Let me tell you about Penny Finding …..

After a 30-minute exam, I got the bad news. Pippy’s HydroCarbon reading was 96 parts per million - ONE part past the 95 ppm allowable limit!

Thought: ONE can make such a Difference!

One penny at a 7-11 when I was doing those noon errands.

Three pennies when I went to Lowe’s for the paint modifications.

One quarter at Target this evening where I stopped for some fuel injector cleaner (as per the mechanic’s recommendation).

So you are one of the millions who are polluting our air and adding to the smog problem in LA. ;-)