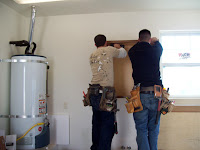 Today I was only expecting the Landscaping crew to be working on site. However, Sparky (our Chihuahua) came to visit and made things happen!

The Slagle Brothers showed up and installed more baseboards, shaved tight doors, installed a wall cabinet in the garage, re-hung closet doors and more. That was a nice surprise. 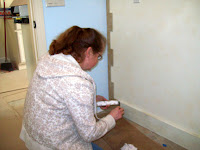 David and Carlos from the electrical team were on site all day. They put on cover boxes, hung light fixtures, found electrical boxes hidden under drywall, and conquered at least half the remaining action items on the two-page list Doc generated last Saturday. 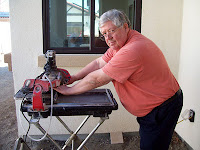 I spent most of the day dealing with the various people on site as well as arrangements and deliveries for later this week. Doc set up the tile saw and cut pieces (quoins) to be glued on the bathroom walls to create the illusion of a building exterior.

This afternoon we were asked to do a walk through with the contractor at Rental House #1. We created a list of 20-30 remaining items for him to complete so that we can get this unit finished.

This evening we signed and FAXed documents for Rental House #2 which is now scheduled to close escrow on this Friday.

Doc came home totally exhausted today and pretty much “checked out”. I took a one-hour break and got a much-needed quick haircut. The stylist said it had probably been six months since she had seen me, I must be really busy. No kidding.

Three pennies for me when Doc stopped to get his coffee on the way to the Penny Palace this morning.

Waterfall!!! Yayyyyy!!! You looked like you were having fun playing. Is that waterfall for the kids to play in or for you? ;)

Both - plus any friends who visit.