This morning Doc and I stopped at Lowe’s to pick up the wood flooring planks for the Loft area. I checked in at the service desk and was told to bring my car to the doorway. After waiting for quite a while I finally enquired and was told the product was waiting for me at the other side of the store. Grrr…

Doc demanded his coffee before he would do anything else. While waiting at a red light, Doc collected a median find. Then at the convenience store, I found a penny and a nickel. (Coins #1-3). 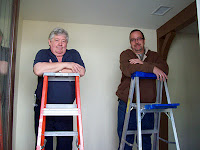 Project Manager Daryl was waiting for us at the Penny Palace. He helped off-load the flooring and then we reviewed the current status of the various projects. At one point Doc and Daryl were up on ladders. For just a few moments today, I let them think THEY were the Higher Management. After that, it was business as usual. LOL

While fetching something from the van, I found a dirt penny in the yard. (Coin #4).

Those four samples of quartz we got yesterday? Three of them look great! And they are much cheaper than the other quotes I had. Plus, Doc and Daryl both liked them as well! Tomorrow we meet with a fabricator to see his costs. 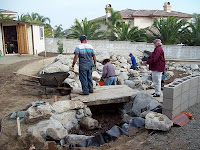 This morning our Landscape Architect (Rod) asked me to stay on site for a few more hours. He said no looking in the back yard because the Garden Angels had a surprise for me. They were just finishing their “wrapping” of it. I literally walked backwards when I had to go out to the garage so that I would not see the yard. 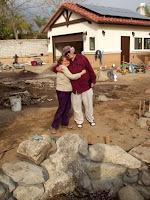 Around 2 p.m. Rod said I could look in the yard. The stream had Arizona pebbles in it, filler stones were placed attractively, and there were PLANTS! Doc and I had not planned to put in plants until well after we moved into the house. (Maybe a year from now). Rod put in several small trees and numerous shrubs. He said those were a gift for us. He also had the irrigation lines hooked up to a timer and said everything would be watered on Mon, Wed, and Fridays! WOW. See photo. Rod looks more like Santa Claus than an Angel.

After work, Doc and I stopped for lunch. I went next door to the CVS Pharmacy to get Doc some distilled water while he waited outside. There was a penny as soon as I walked into the store. As I passed the photocopy machine, there was a nudging: “Check the coin return”. Tina:

“I do not like sticking my fingers in the coin returns”. Nudging “Do it”. Tina: “Doc usually does that, so I will do it on his behalf”. There was a nickel there! Nudging: “Check Again”. Tina: “C’mon once is enough”. Nudging: “Try again”. There was a second nickel!

The next stop was the lighting store. I needed to modify one light fixture. As I hopped out of the van, I found a penny - good omen. Inside the store I asked the Assistant Manager for ideas to correct the problem with the light. She told me it was not possible. I again explained the situation and said I thought it could be remedied. She disagreed. She did give me a business card for a lighting repair man. His business was 30 miles away! I did not like that option so I asked the Angels for assistance. Immediately Maria was brought to the front desk and within moments she had the light disassembled. She said employees were not allowed to alter lights, but she could instruct me as to what needed to be done. She gave me the necessary threaded rod, the verbal instructions, and her good luck wishes. Thank You Angels!

This evening Doc and I have been doing a few things for the rental properties. Oh yes, we closed escrow on Rental #2 this morning! Tomorrow morning we meet with the contractor for a walk through of Rental #1. Sunday morning we are to meet with a potential renter for it.

Lesson: Rather than getting “frustrated” (the nicer way of phrasing it), keep asking for assistance throughout the day. It is truly amazing the results you will get. There have been a number of manifesting stories this week. Too many to write about. Sure makes me smile at all those “COINcidences”.

Hello Tina,
It is kind of Rod to make you greenery gift. What a man!
With love from Russia