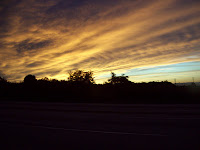 Today there was a gorgeous, angelic sunrise as we approached the Penny Palace. Things were looking great for the patio concrete pour. We exited the freeway and started up Haven Ave. The winds got stronger and stronger …. by the time we reached the house, the gusts must have been 50-60 mph. Not good at all. Santa Anas according to Wikipedia “The original form may have been an Anglicized version of the Spanish,

At 7 a.m. the concrete crew was desperately trying to prepare last minute details before the concrete truck arrived. The winds would not allow that. The gave the crew No Mercy. Every time the crew taped off a section of the house, the winds would immediately rip off the protection. I think the crew finally gave up on the idea and tried to be extra careful when pumping. 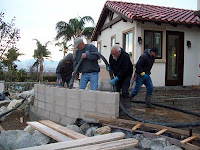 When the 14 cu. yds. of concrete arrived, it was all hands on deck. The winds were blowing the concrete overspray on waterfall stones, the bridge and other places we didn’t want it. Twigs, leaves and the recently-placed planter mulch were blowing and embedding themselves in the fresh mix. Not nice. Not the finish we wanted on the patio.

Landscaper Rod was there to oversee his part of the pour. He suggested an acid wash finish on the patio whereas Concrete Rick had planned for a broom finish. I was undecided which way to go. Rod said “Hop in my car and I will show you a nearby residence as an example”. The owners were not home, but that did not stop Rod. He took us in the backyard and showed us an immaculate patio, pool, spa and plantings. I liked the acid wash finish, but also respect Concrete Rick’s opinion. Thus I said, “Penny Angels, how do I choose?” I remember laughing and thinking, “Don’t be silly and expect a penny just sitting here in the middle of someone’s pristine yard!” We walked out the gate and in the driveway was a penny! Rod walked over it, but I pointed it out to him. He accused me of planting it. Doc came to my assistance saying, “No she did not. And there is another one behind her now!” (Coins #1&2). 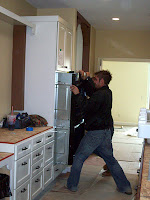 Inside the Penny Palace there was also plenty of activity. Countertop Francisco dropped in to pick up the templates for the sinks. The Slagle brothers hung the café doors in the bathroom, installed the baseboard in the loft and cut the opening for the oven. The electrical team placed a box in the arbor, installed the oven, adjusted light sensor sensitivities and occupancy sensor time delays.

At 1 p.m. I met with Iron Jim regarding the driveway gate and the upstairs railing. A few nights ago the railing design finally “clicked” in my head and I was able to create a sketch for review. It has to do with our “Hart and Sol” theme as well as Pennies (of course). It looks very feasible! Yipppee!!

By 2:30 Doc had reached the grumpy-hungry level. So we headed to Jack’s. The drive up line was very long and I was tired and impatient. Doc suggested I hop out of the van and walk over to the 7-11 store to search for coins while he was in line. I looked at Doc and said, “I don’t want more coins today! That just means I have more to write about tonight and quite frankly I don’t want to see any more coins today!” Then I turned away from him and stared out the window in protest. There was a penny next to the van! Dog gone those Angels. No Mercy! (Coin #3)