When the new year arrived, I promised Pippy she would get cleaned. (Nice Thing). I figure she deserves a bath at least once every six months for all the dirt she deals with. This morning after I took my shower, I took Pippy to the Car Spa. While waiting, I did a Singsong to the Penny Angels. Found two pennies in the finish-cleaning area. (Coins #1&2). 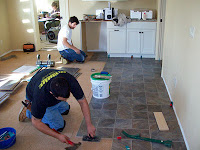 At the Penny Palace the flooring guys placed the cork underlayment in the dining area and then placed half the laminate flooring. Finish Carpenter David installed heavy duty door stops on the two main entry doors. Those should be effective in keeping the doors from damaging the walls. (Nice Thing). The landscape team was putting wire mesh and concrete in the bottom of the upper two ponds. Now we will be able to walk in those. I applied a decal to the Garden Bathroom wall. (Nice Thing) It looks like a window box and is above where the toilet will be. 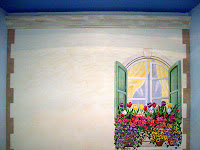 This evening my friend JJ (who currently lives in Texas) was in town. (Nice Thing). I was anxious to show him the Penny Palace since he has been hearing about my dreams for 15 years. As usual, he was running late for our appointment, so I used the extra time for errands. One penny at the paint store, one penny at the party supply store, then a dime and penny at Target. (Coins #3-6). 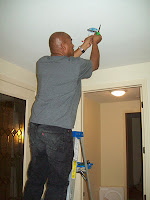 After dinner (a Nice Thing) JJ and I headed to the Penny Palace. He said the Penny Tales photos of the fireplace don’t do it justice. It is better in real life. Then we went outside to see and listen to the stream. (Nice Thing). 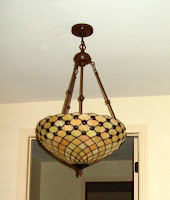 Since I bought dinner and there is no such thing as a ‘free meal’, I asked JJ to install the Penny Pendant light (he is a former electrical engineering student). It took us several attempts, but we finally got it in place. I forgot to buy candelabra lightbulbs, so we could not illuminate it! However, it is attractive even without being lit.