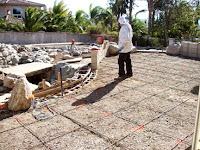 Three different trades were working at the Penny Palace today. The concrete team was putting in formwork and rebar for the Patio pour. They also created formwork for the Dungeon entryway and for the slab under the HVAC unit. The Slagle Brothers created the shelving for one of the Master bedroom closets and for the garage. The flooring team finished the new wood insert area upstairs. 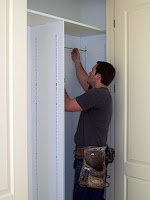 A few other beings were on site as well. Doc and Sparky dropped in for a little while. Doc delivered the 5 bathroom sinks, the laundry sink, and the corresponding faucets. Project Manager Daryl came to check on things. HVAC Brian stopped to check on the formwork for his slab. 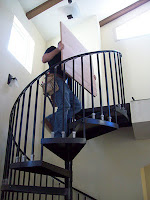 At noon Doc headed to CPP to do some work. He stopped at McDonalds for some burgers and a penny.

After leaving the Penny Palace at 4 p.m., I went to the cabinet shop to resolve the issue about the oven cabinet opening. There was one round UFO (Unidentified Found Object) of some sort in the dirt. It is a very dark brown color. Could it be a slug? Foreign Coin? Not sure. I need to go wash it to find out what it is …… I left that soaking while I continue this Penny Tale.

I was hungry so went into the grocery store for some beef jerky. No coins there. There was a self-serve car wash near where I had parked Pippy, so I wandered over there. I didn’t have much luck at first, so I did a SingSong. Found a penny right away. I said, “Angels, only ONE penny today?” and immediately I found a second penny. To which I said, “Thank you for your 2¢ Worth!”

Let’s go see about that soaking disc … It is a quarter! That is a surprise. Didn’t think quarters could turn such a dark brown.