Six months of the year have flown past already.  To Doc and I it seems as though not enough has been done at the Penny Palace recently.  Doc was teaching, and my heart and energies were focused on the Sasha Project.  We had a visitor who had not been to the house in a year.  He walked through the house and was amazed that we have furniture and window coverings and kitchenware and …

Although I have not written Penny Tales very frequently, we are still finding coins nearly every day.  Yesterday alone, we found 26 coins. In June we found coins 27 out of the 30 days.  (There were a few days when I did not leave the house).

***********
Last week Doc and I were in San Louis Obispo in order to put his parents’ house on the market.  It was 10 p.m. and we were sitting in the hotel room.  Doc said, “let’s go walk down the street a bit”.  Of course everyone KNOWS you can’t find coins in the dark … After a few minutes I began a SingSong  “Hey Penny Angels won’t you come out to play, come out to play, since we have no coins yet today …”  Within one minute I found a penny.  Then I said, “Just to prove this is not a fluke and that you ARE here, do you wanna do that again?”  Within 60 seconds there was another penny!  And then we found 3 more within a few minutes.  Fun stuff. 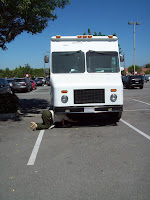 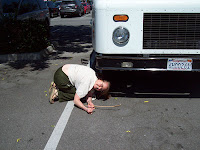 One day Doc spotted a penny under a large truck as we pulled into a parking spot.  We hoped the truck would move while we conducted our shopping so we would have easy access to the coin. No such luck.  So I got out my handy-dandy “arm extender” (back scratcher) which we keep under the seat of the van.  No problem when you have the right tools!

Thought:  God said he would provide for us, he didn’t necessarily say things would be simple.  We are expected to do our part as well.

On another day we were having lunch in a little café. I was disappointed because although we had walked the town, we hadn’t found any coins.  After bussing our dishes, I returned to find a penny under my chair.  Good for a laugh.

Lesson:  Sometimes the items were are seeking are right underneath us.  We just need to get off our butts and do something in order to realize that!