Last week I wrote to you about two Mag-ni-fi-CENT coin finds.  One Aussie Penny Pal had such a clever response; I just have to share it with you.

Great to hear from you and that your CENTs of humour is not retiCENT nor abCENT, your optimism unCENTsured and as you asCENT innoCENTly and omnifiCENTly further into this CENTury  without complaCENTcy your reCENT indeCENT abCENTce of CENTS changes to more adjaCENT, munifiCENT and even incandesCENT perCENTages of success.

NOTE: Robert is a retired accountant from Australia whom Doc and I met on a bus tour in Canada a few years ago.  He was travelling alone.  Doc and Robert got along well and Robert had fun Penny Finding with me so we hung out together.  We have kept in touch over the years.  April 2020 Doc and I had plane tickets to visit and stay with Robert and his wife in Victoria, AUS.  I had started packing our suitcases, but COVID-19 shut down our plans.   Instead of visiting in person, I mailed them a postcard which they finally received last week!  (That would mean it was in transit for NINE months!)  This pandemic has sure created chaos in all aspects of life as we knew it.

Doc has just added HIS 2 CENTS worth here:

Thanks to Bob for his reCENT and deCENT prose celebrating the mighty CENT.

2020 was definitely a challenging year for Penny Finding.  As you’ll recall, at Consecutive Day #1000 (April 8) Doc and I decided it was safer to follow the Stay at Home edict than to go out Penny Finding.  Our son (the medical doctor) kept scolding us about leaving the house.  Currently the evening news is reporting that in Los Angeles County a person is dying of COVID-19 every 5 minutes.

There were only 15 Hits for the Cycle.

Since I first threw out the Penny Challenge to the Universe in December of 2008, I have found more than 33,000 coins and currency worth over $1,500.

The number of coins found in 2020 was much lower than in previous years. I was lamenting that fact to the Penny Angels. Condensed Discussion:

“Hi Penny Angels.  2020 year was kind of a bummer as far as Penny Finding.  And it doesn’t appear that 2021 is going to be much better.  People are sheltering at home, using their plastic cards to purchase things, and there is a national coin shortage.  This Penny Finding is becoming more and more difficult.”

It seems that Penny Angels (Divine Beings) have a “Cents” of Humour and are with us despite COVID-19 and other factors.  They proved that in the two days after I had that discussion with them.

Saturday Doc and I stopped for a hamburger.  As we approached the drive up window, I spotted a penny, then another and another …  In those few minutes, Doc acquired his burger and I had acquired 19 coins (15 Pennies, 4 Dimes).

That was pretty reassuring that the Angels were still out there.

Then the next day Doc and I stopped to admire a block planter which was being built at a local residence.  Keep in mind this was a residential neighborhood – to find ONE penny in that environment would have been amazing.  Doc said “Hey is that a coin in the street?”  I went to pick it up.  I spotted another penny, then another, then another … There were 65 pennies scattered about!!!

The Penny Angels made quite a Magnifi-CENT statement with THAT find.

Yes, there are Forces around us to help us deal with this pandemic and other challenges were are facing… plus even a little bit of fun here and there. 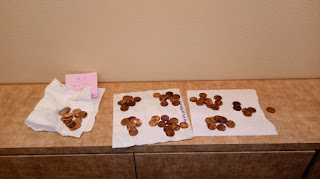 To say that Penny Finding has been affected by the pandemic is an understatement.

·       Other people are staying home, so there aren’t as many wayward coins

·       People are using plastic instead of coins for their purchases

This evening (New Year's Eve) Doc and I went to the grocery store for a few items.  I was not EVEN thinking of Penny Finding.  As we were checking out, I spotted a dime, then a nickel.  Then Doc spotted a dime.  Uggg … A sudden case of Penny Fever hit us.  It came on so totally unexpected!

Doc and I noticed the coffee shop had closed early for the night.  That left the drive up window vacant…  Score!  There was a quarter there!  So now we had nickel, dime (2) and quarter.  That makes three of the coins needed for a Hit for the Cycle.

Doc and I hopped in the car and began driving home.  Then we realized Doc still needed more steps to reach his 12,000 goal for the day.  Tina: “Doc, park the car.  Let’s do your steps here in the parking lot.”  We walked and walked, but found no pennies.  So I got a bit sassy with the Penny Angels.

Tina speaking out loud while walking: “Hi there Angels!  It’s been a while since we have played together.  It is generous of you to provide four silver coins tonight, but this is PENNY Tales, so I am requesting a PENNY Please.  So far we have 3 of the 4 coins needed for a Hit for the Cycle (HFC).  The last HFC was way back in September!  It would make for a great conclusion to 2020 to complete a HFC.  Please consider my request”.  Within moments there was a Penny in my path.  COINcidence?