Sunday was Day #829 of consecutive penny finding.  Doc and I planned to get extra rest and to prepare him and the house for his Knee Replacement surgery on Monday.

Friday night we got a lead that the single female renter (V.S.) in our Montclair house was no longer living there and had removed all her belongings. She was living in a nearby city undergoing voluntary drug rehab.  Also that there had been police activity at the house earlier in the day.

Saturday morning Doc and I received a bill from Edison saying the electricity account had been closed two weeks ago and reverted to our name! Earlier in the week someone had asked us if we had new tenants because there were unfamiliar cars and people at the house.  It was time to take action.  I sent an email and a text to V.S. saying that as per our contract I was giving 24 hours notice that we would be entering the house to conduct some maintenance.  (I had been trying for six weeks to set an appointment for the annual walk through, but she would not set a date. No wonder!)  Within minutes V.S. responded.  She firmly told us that were not allowed to go in since that would be violating her privacy rights.  OK. That response proved she got my notice.

I was calling upon a verse from A Course in Miracles: “If you knew Who walks beside you on the way that you have chosen, fear would be impossible.”   I was determined not to let the “What If Fears” take control.  I needed to remember that Divine Powers are ALWAYS with us.

Doc and I had tools and were prepared to remove planks from the back fence to gain access to the house if the front door was bolted.

We called for Police Back Up because I was scared to go in without it. If there were people in the house, I wanted the invisible Angels with us as well as visible “Angels in uniform” behind me.
There were no cars in the driveway.  Three police arrived.  They asked for proof that we were the homeowners and had the right to enter the house.  Then they asked us to stay back as they entered the house with guns drawn … 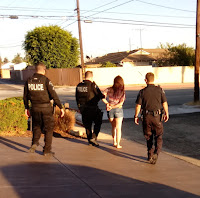 After what seemed like a very long time, the officers came out with a barefoot female in shorts, a skimpy shirt, and handcuffs!  We were told she was under arrest for something not related to being in our house.  She was insisting she was a guest of our renter.  One kind officer went in to get her some shoes before they took her away.

The officers told us we were then welcome to enter the house and conduct our inspection.  The house was essentially empty of V.S.’s belongings -- no fridge, washer, dryer, furniture, food, clothing, bedding, etc.  In one bedroom we found a filthy mattress on the floor and clothing strewn about.  I looked under some of the clothing and found a box…

In the box were uncashed checks from various sources, checks with payees and amounts whited out, credit card authorization forms with signatures and blank amounts, credit cards, etc.  This looked like potential mail theft or identity fraud.  Doc and I locked up the house and transported the box to the police station.   The officer who accepted the box of evidence said to make sure I washed my hands well.  Why?  Because there was drug paraphernalia, heroine and meth in there! 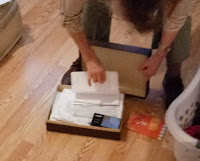 On the way home Doc and I needed to stop for some groceries since we would be “holed up” for 7-10 days after his surgery.  At the first store I found a nickel, then a dime.  I was ready to go home.

Doc wanted to make a stop at one more grocery store.  While driving there I was talking to the Angels.  “Not to sound ungrateful or anything, but here in the U.S. nickels and dimes do NOT count as pennies.  This is, after all, PENNY Tales”.  As we walked into the store, there was the requested penny.

Then I got even bolder… Doc and I were exiting the store and I said “Penny Angels if you REALLY want me to believe that Divine Powers are always with us, then you will provide a Quarter to prove it and complete a Hit for the Cycle.” “Besides, it would make a really awesome story to post for other people to read”.

I was quietly thinking that the probability of finding a coin before getting to the car was pretty slim, let alone finding a Quarter.

Yup.  You guessed it.  There was something round under a shopping cart.  I pushed the cart aside … there was the quarter requested to “prove Divine presence”.