We were on the bus much of the day.  Lots of information about Panama: Traditions, Holidays, Religions, Exports, Education System, Pan American Highway, Revenue Sources, etc.  At the new Visitors Center we learned about the Canal Expansion Project. We actually got to drive the bus across one of the new canal locks before its official opening next month.

Arrived in the city of Colon for a very quick potty stop within a high security yard.  Not allowed to leave the building to go across the street for post cards or penny finding.

Late afternoon we arrived in the Gamboa area.  Evidently the area was immaculately kept when the Americans were in charge of it.  Since the turnover of the Canal Zone to the Panamanians, the area has been pretty much deserted and is in shambles now.  Took a boat ride on the Chagres River and enjoyed seeing the wildlife 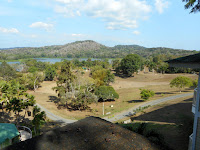 Our lodging was at Gamboa Tropical Resort.  Miles from any place likely to have coins (grocery store, gas station, car wash, convenience store).  The Penny Finding potential was looking pretty bleak at this point.  Finally!  One lonely penny found in a planter bed in the resort lobby.


Tuesday, April 12th
2P
The alarm clock went off at 3:15 a.m.  Uggg!!!  You call this Vacation?  Certainly NOT relaxation!   The bus departed at 5 a.m. for the 1.5 hour journey to the dock where we would board the transit boat.  This is why Doc embarked on this vacation – to travel through the locks of the Panama Canal.  It is said that if you touch the side of the locks, you will remain happily married.

Our Partial Passage through the Canal was awesome.  Too much information to include here.

We returned to the Gamboa Tropical Resort.  Doc and I enjoyed the informative presentation about sloths and were able to get close to them. 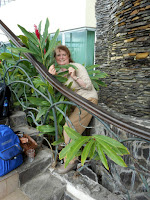 My expectations of finding a coin were pretty low.  We searched many pathways and planter beds, finally finding one penny inside and one penny outside. One was just slightly of the beaten path.  After sunset we enjoyed a brief wildlife safari and spotted crocodiles in the river and a sloth in one tree. 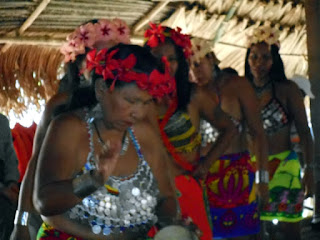 This morning was a more leisurely one.  We took a boat to an island with an Embera Indian Village.  The women are usually bare-chested and wear skirts called Palomas. However, for tourist guests they donned upper coverings made from coins!  I was hoping one of those many coins would fall off …

We visited the Smithsonian’s Tropical Research Institute.  There were areas for orchid research, the Butterfly Atrium and the Poison Frog Pond.  No wayward coins anywhere.

Late afternoon we checked into the Westin Playa Bonita Hotel.  A very elegant place where heads of state stay when in town.  Fellow passengers thought it a wonderful place right on the ocean.  They quickly put on swimsuits and headed for unlimited snacks at the cabana by the magnificent pools.  I was not excited about staying in a place which was located miles from anywhere else, focused on sun worshipping, active in the bars, and too pristine for wayward coins.

Doc went to the ice cream shop while I covered up from head to toe and walked the grounds in search of today’s coin.  No coins, but I did spot this very interesting bright blue crustacean!

Around 6:30 p.m. the sun was going down and so were my hopes of finding a coin.  I wandered glumly to the front of the hotel where passengers might drop coins when getting in and out of their cars or taxis.  An “angel” appeared. His name was Richard.

Richard (who was out in front of the hotel to help guests with their transportation needs) asked, “May I help you with something?”  I replied, “Sure!  I NEED to get a Penny Today!”  He asked, “U.S. or Panamanian?”  I replied, “At this point I will take either one!”  Richard asked if perhaps I needed it to scratch a lottery ticket?   “No… I need it to continue the Penny Finding Streak”.  Of course then it was necessary to explain more about the Penny Angels and the Penny Palace.

Richard and I continued chatting excitedly about all sorts of topics.  The parking lot lights came on and I realized I’d better go Penny Hunting.  Richard suggested I go walking in a nearby lot which he deemed fairly safe.  He said he had not ever seen coins there, but “felt” strongly that I should go there.  You might even call that a “nudging”.   Richard confidently stated “You WILL find a coin.  I KNOW it!”

As I walked down to the lot, my expectations were low and I was talking to the Angels.  “Hi Penny Angels. Richard seems to think you will deliver a coin down here.  It would do wonders to validate his nudging if you delivered.  Also, fellow travellers on this tour will be asking me tomorrow if I found a coin today.  It would be really good in proving your existence if you chose to provide a coin.”

There were maybe 30 parking spaces in the lot.  It was getting dark as I carefully searched and searched to no avail.  I was walking back to the hotel entrance in disappointment.  It appeared as though the nearly one-year of consecutive finding days might have ended.  Just then there was a gleam!   A penny!  I was thrilled.  And next to it was a nickel!

I ran back to share the excitement with Richard.  Tomorrow the tour plans are to “enjoy the resort”.  Other people plan to lounge at the pools etc.  I NEED to get out and look for postcards, postage stamps, and coins.  So I asked Richard if I could hire him for 3 hours in the morning to go into town and go Penny Finding with me.  (Crazy American)  Richard agreed!